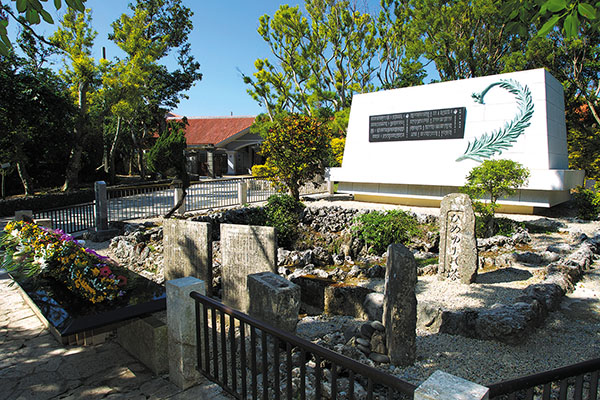 During the last days of the Battle of Okinawa, a group of 222 young girls and 18 teachers at the Okinawa Women's Normal School and the First Prefectural Girls High School were ordered by the Japanese Army to join the Haebaru Army Field Hospital medical unit as the Himeyuri Student Corps. The women died in a cave along with Japanese soldiers rather than surrender to the Americans, who they were told would rape them. The Himeyuri Monument was constructed here in memory of the young girls and teachers who lost their lives. The Himeyuri Peace Museum consists of five exhibit rooms displaying photos from the Battle of Okinawa, portraits of the victims and books of testimonials by survivors.
Former nurses who experienced the war and were part of the Himeyuri Student Corps serve as volunteer guides at the museum. The museum hopes that everyone will learn the importance of peace in the world through an extensive range of exhibits showing the realities of war.

The Himeyuri Monument was constructed here in memory of the young girls and teachers who served as nurses for the Japanese Army and who lost their lives during the Battle of Okinawa. The Himeyuri Peace Museum displays a full-size replica of a bomb shelter, books of testimonials and portraits of the victims.