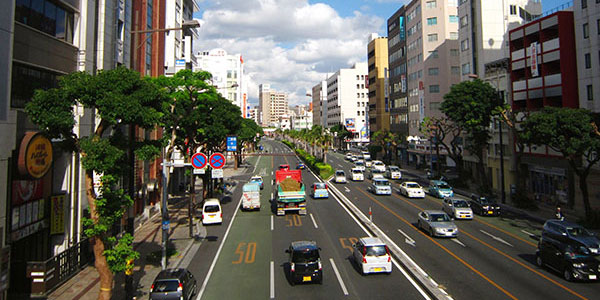 Naha City — the capital of Okinawa Prefecture and also the island’s business center — is home to a number of accommodation facilities of varying types, eating and drinking establishments, souvenir shops, shopping malls and commercial complexes. Kokusai Street, along with its neighborhoods, is considered Naha’s downtown area. Shuri, with its iconic Shurijo Castle, is the area that thrived as the capital during the Ryukyu Kingdom era. Naha’s Shintoshin, or Omoromachi, area is a popular shopping district dotted with large shopping malls, shops and restaurants, while the Naminoue area offers the only bathing beach in the city, Naminoue Beach, which not only affords great swimming but also a variety of water-based activities. Naha Airport is located in the southernmost part of the city, known as Oroku.

Yui Rail, a monorail running about 13 kilometers across Naha City, from the airport to Shuri, is the only rail transportation system in Okinawa, where no train service is available. Taking a leisurely ride on the monorail is a recommended way to explore Naha without worrying about driving in an unfamiliar place or finding parking. Get off at Kencho-mae, Makishi or Asato station to go to the 1.6-kilometer-long Kokusai Street.

Driving time from Naha to Chatan in central Okinawa is about one hour, and it’s about one-and-a-half hours to Nago in northern Okinawa via the Okinawa Expressway. During the morning and evening rush hours and also on holidays, the city’s traffic congestion tends to increase considerably, and it may affect your itinerary.

There are three ports located in Naha City: Tomari Port, the gateway to the Kerama Islands, Kume Island and Aguni Island; Naha Shinko (Naha New Port), the hub for maritime transportation between Okinawa and mainland cities, such as Tokyo, Osaka and Kobe; and Naha Port, the point of departure for ferries to Motobu in northern Okinawa and the Yoron and Amami Oshima islands in Kagoshima. The three ports are located in different places in Naha City; please make sure from which port your ferry leaves.

Shurijo Seiden: Standing in stark contrast to the brilliant blue sky, the bright red Shurijo Castle presents an elegant and magnificent sight to all who visit. The courtyard, called the Una, used to be at the heart of Shurijo Castle, where numerous national rituals and ceremonies took place during the days of the Ryukyu Kingdom. The Una is covered with bright tiles called sen, which functioned as markers for the placement of officials lined up for ceremonies. The diagonal road at the center is called the ukimichi, and only a few selected people, such as the king, Chinese ambassadors and their messengers, were allowed to tread upon it.

Naha's Makishi district is a place where you can get a glimpse of the days when Okinawa was known as the Ryukyu Kingdom, which flourished by trading with various countries around Asia. You can find interesting marketplaces all around the district, some of which are located in the Sakae-cho area, which thrived as Naha's downtown in the old days.

The Naha Public Market (Makishi Kosetsu-ichiba), Naha's central produce, meat, fish and general merchandise market, is an excellent place for visitors to go to learn about everyday life in Okinawa.

When tourists visit Okinawa, they almost always go to this vibrant, 1.6-kilometer-long street which runs from the Kumoji intersection, where you can find the Prefectural Office and Ryubo, to the Asato intersection. It's easily accessible from the monorail's Makishi, Miebashi and Kencho-mae stations. Kokusai Street is home to famous department stores and shopping malls, such as Mitsukoshi, large-scale discount retailer Don Quijote, and numerous souvenir stores, hotels, steakhouses and Okinawan eateries.