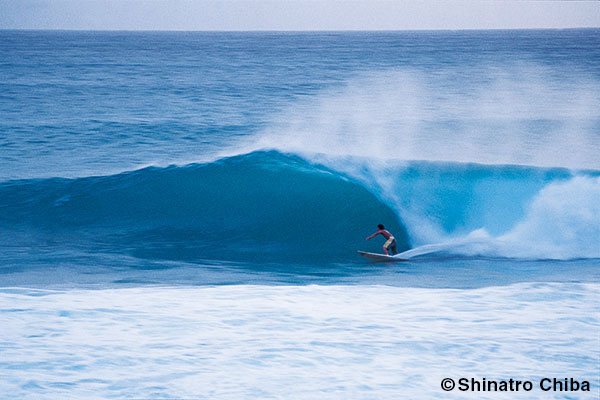 Who says there aren’t any waves in Okinawa?
American surfer Scott Ellison, owner of surf shop Source at Sunabe Seawall, gives some tips for surfing in the area

In Okinawa, the prime months for good surf are commonly from mid-June through mid-March. Although a disturbance occasionally arrives early in the season, spring is when local surfers go stir-crazy waiting for the typhoon season to heat up. June typically sees the start of consistent swells on the southern and eastern shores. These swells are created by tropical disturbances and typhoons that normally begin in the South China Sea. The west coast is, as a rule, dreadfully flat during the summer unless a tropical storm tracks up through the Taiwan Straits and enters the East China Sea. Okinawan summer climaxes with several big typhoons, which create a surf smorgasbord for frenzied surfers. Summer swells are generally long-period swells: The waves are created by storms far removed from Okinawa's coasts. These are the best for surfing, as there is usually little or no wind accompanying the swells, and the waves are well defined and organized. In addition, long-period swells are more powerful and move at a greater velocity than their smaller, unorganized, short-period cousins.

In late October and early November the winter season begins with swells generated by low pressure swooping down on Okinawa from China. A typical winter sees the west coast with 10-15 days of good surf and another five to 10 days of mediocre surf a month. The east coast commonly has waves every day during the winter; however, due to consistent northeastern winds, the coast is onshore the entire season. The south coast is also reliable for regular surf except when the northeasterly wind is blowing. Unlike summer swells, the winter variety is generated in close proximity to Okinawa. This means that the period between waves is very small, which results in unorganized surf with strong winds. Winter surf is commonly big and choppy while the low-pressure front travels over Okinawa. Once the front has passed, the swell is cleaned up by offshore winds, but its size diminishes rapidly.

Most of the rumors of Okinawa not having surf had their beginnings with divers. They customarily seek out protective dive sites for safety reasons, and this has caused more than a few divers to assume that Okinawa does not have any surf. Okinawa might not have the world-renowned surf or high profile of Hawaii, but this is fine with the dialed-in local surfer. The local surfer always has a knowing grin when he hears the phrase, "Okinawa doesn't have any surf," and more often than not lets out a little chuckle. 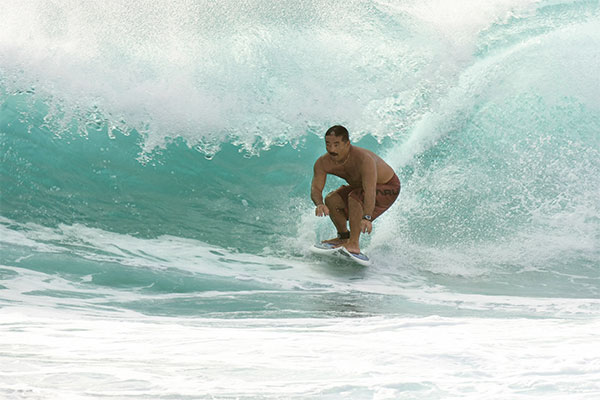 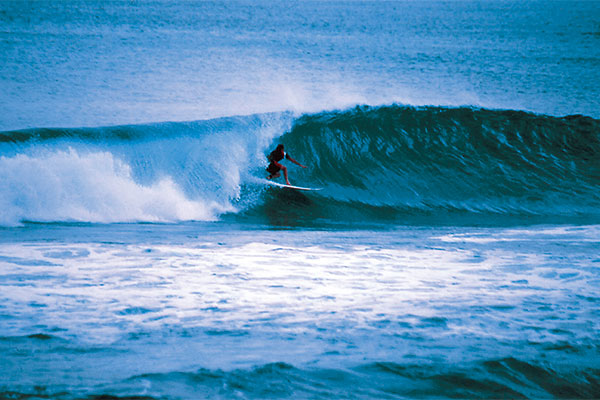 Left: His name is Kazubo, a legendary local surfer and the owner of Hard Reef, a surf shop & bar located in Sunabe. Photo by Yoshinobu Nunokawa

Ikei -- all year
Very consistent. Many rights and lefts. Can handle big swells. Can get really really good!
Best conditions: S←→NNW swells and SW←→NW winds.
For getting local information, checking on gear or starting surfing, Source has everything you need. The store’s second floor is the Hot Curl long board shop.

With more than 15 years of surfing to his credit, Yoshi Nunokawa is a surfer and photographer who moved to Okinawa 20 years ago. On his own blog he introduces images of waves that he captures daily at beaches around the island as well as information on wave conditions. His original Japanese website is located at http://sunabe.blog84.fc2.com/, but you can access the English version by clicking on the Blog by Yoshi link listed on a local surfing information web page, www.mensoresurfing.com.