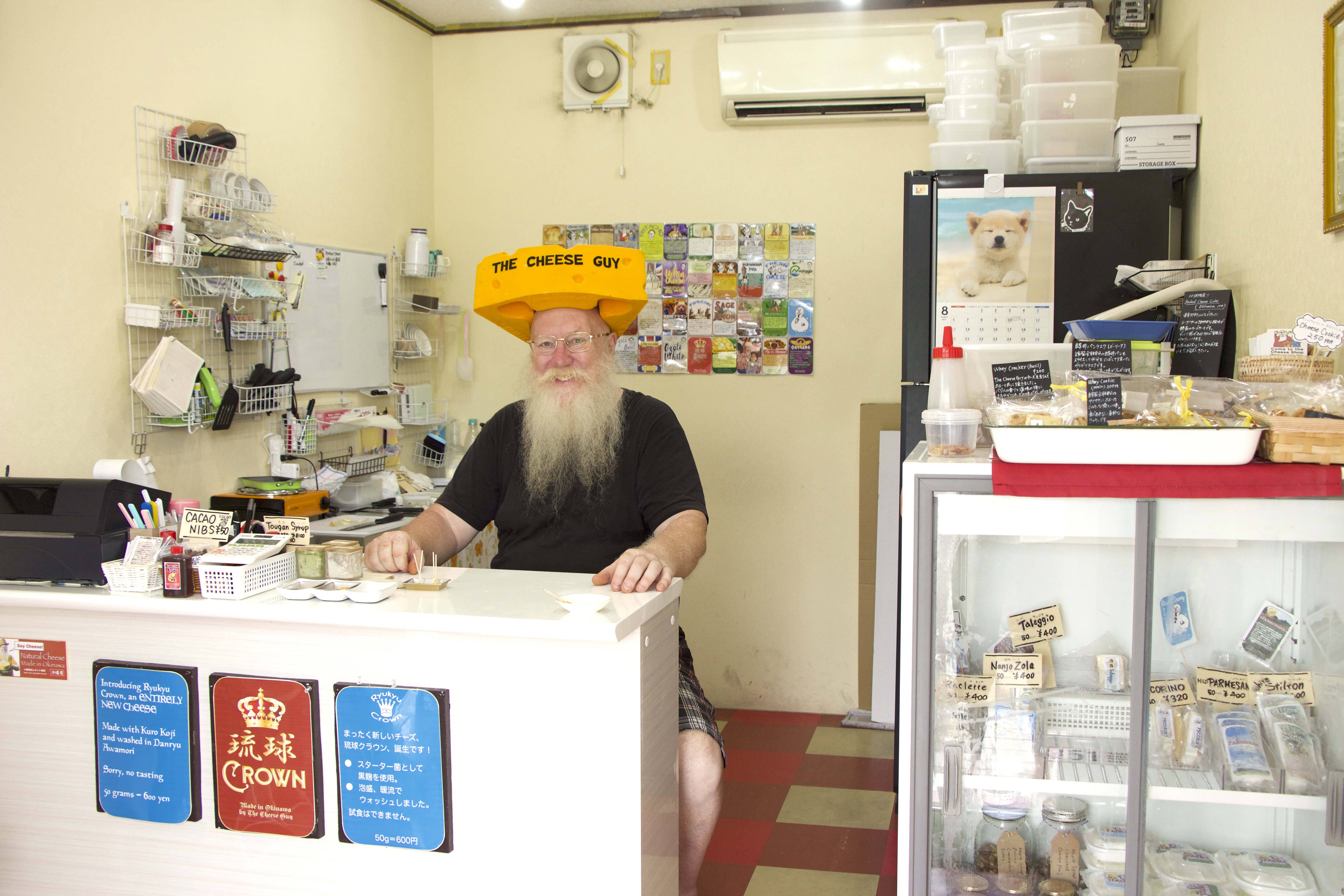 According to John Davis, The Cheese Guy, cheese-making is not as difficult as it seems. In fact, Okinawa's high humidity is quite suitable for this ancient process. The hard part is doing it well. John, who has been at it for years now, runs the Cheese Shop in JA Atoll, Nanjo City, daily going the extra mile to make truly special cheeses that are 100 percent made in Okinawa.

Born in England, John first came to Japan in 1976 after quitting his teaching job. “I wanted to go somewhere I'd never been,” he said. He moved to Okinawa in 2006, seeking warmer climes. Although he's loved all of the years spent in Japan, he had noticed the difficulty in finding natural cheese. Cheese, according to John, is an indispensable part of life for most Westerners, but was often hard to find in Japan. He remembered the cheeses that his mother used to make back home in England and decided to take matters into his own hands.

After much time spent on research and gathering the tools of his new trade – and no small amount of trial and error – John eventually overcame his initial challenges and got a handle on the process. Among these challenges was finding a source of the high quality milk he would need to produce the outstanding product he was striving for. The solution presented itself the day he met Kiyoshi Oyadomari, who owned a dairy farm in Nanjo City. In Oyadomari John found someone with a passion for his product to match his own. They hit it off immediately, and Oyadomari invited John to produce his cheese on his farm where he would have easy access to the freshest, most delicious milk.

John's cheese-making expertise burgeoned and blossomed soon after. Now, his selection includes 50 varieties, from plain cheddar to more exotic types using various Okinawan herbs. John's efforts to keep his products local have extended even to his choice of kuro koji – a black yeast used in the manufacture of awamori – as a fermenting agent. John has also recently begun to recreate another one of his mother's recipes to share with his customers in the form of thick, creamy yogurt – which is unlike anything available in grocery stores.

Two of John's cheese were chosen for the 2015 Nanjo City Selection prize and another two in 2017. John's fame is spreading, and customers come from far and wide to sample the famous cheese at his shop.

John's cheese are handcrafted using fresh whole milk from the Oyadomari Dairy in Nanjo City. Selections range from traditional cheeses such as Stilton and cheddar to exotic cheeses made with local herbs, such as sakuna, fuchiba (mugwort) and black carrot. John has soft cheeses, fresh cheeses and blue cheeses, mild and really strong. Something for everybody. And, of course, his rich, creamy yogurt.