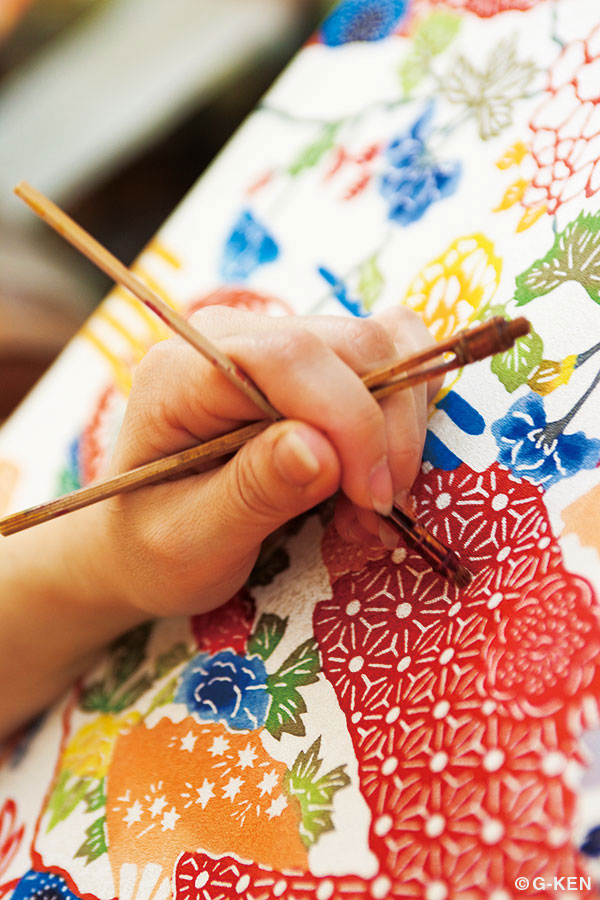 Okinawan textiles developed under the influence of fabrics from Southeast Asia, China and mainland Japan. The rich variety and technique of Okinawan textiles are beyond compare, even surpassing those of mainland Japan. Okinawa is blessed with a variety of subtropical plants that can be used to dye textiles. Turmeric produces yellow pigment, and Japanese bayberry results in brown. And several different kinds of plant pigments are mixed to achieve a wide color range.
Bingata, the epitome of dyed Okinawan work, is identified by its beautiful array of radiant colors, including vermilion, purple, indigo, yellow and green. It was used for royal attire and also for clothes worn by court entertainers. Bingata is an important craft representing the Ryukyu culture.
Traditionally grown on Okinawa, Ryukyu indigo is valued for its color, darker than other types of indigo. Although it was once commonly produced throughout the northern Okinawa region, the only production site today is in Motobu. Uujizome, characterized by its distinct green and yellow coloring, is a recently developed form of dyed textile using sugarcane leaf extract and is very popular with tourists and locals alike. 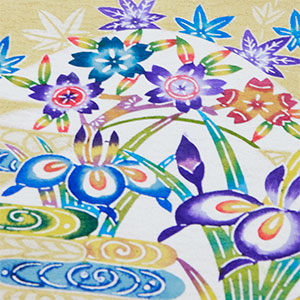 Bingata
Bingata is a traditional Okinawan textile in which colorful designs are stenciled onto cotton or linen fabric. In production since the days of the Ryukyu Kingdom, bingata is still being created by artisans in both age-old and more modern designs and media. 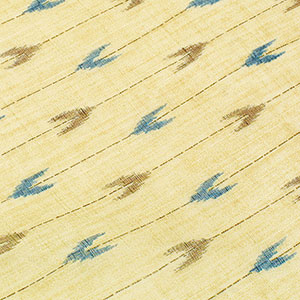 Basho-fu
Basho-fu is the oldest of all Okinawan handwoven textiles. Due to a decline in the number of basho (Japanese banana) plants, it has become a valuable textile produced only in Ogimi Village in the north of Okinawa’s main island. 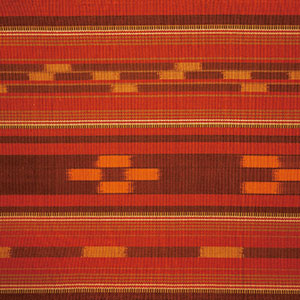 Minsa
Of all the minsa in Okinawa, that of Yaeyama is the best known. The alternating pattern of five and four small rectangles symbolizes ''love forever,'' because of which a woman in olden times would give this textile to the man she loved. The handwoven piece was also believed to protect the person who received it. 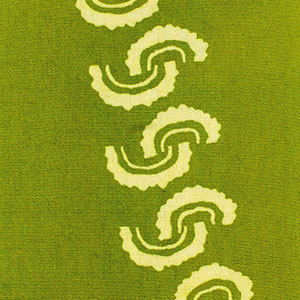 Ujizome
This textile is handwoven and dyed with sugarcane extract, resulting in distinctly brilliant green and yellow designs. Both tourists and locals have taken a liking to this uniquely colored fabric. 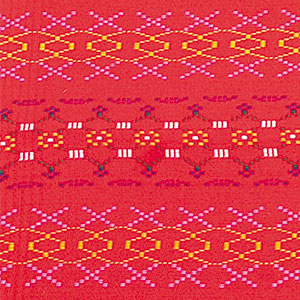 Yomitanzan-hanaori
Yomitanzan-hanaori, originally limited to court circles during the Ryukyu dynasty, is made from silk or cotton and features geometric designs or colorful patterns. Flowers are created on the fabric by means of small dots of fiber.