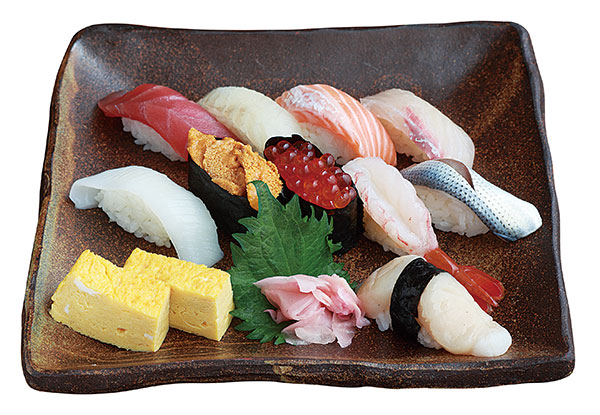 Sushi rolls, with ingredients like shrimp and avocado, were conceived in America when eating raw fish was an alien concept but have now won international acclaim. However, why not try genuine Japanese sushi when you’re in Japan? Traditional Japanese sushi is a small rice ball flavored with sweetened vinegar and topped with sashimi or thinly sliced seafood. At sushi restaurants you can enjoy standard Japanese fare including fresh sashimi. Dishes of the day are recommended for those who want to enjoy freshly caught seafood of the season.

A sushi chef’s apprenticeship requires a long period of time: three years for cooking perfect sushi rice and eight years for making the ultimate in sushi, at a minimum. At traditional restaurants, a sushi set (either one or two pieces) with expensive toppings such as toro (fatty tuna) is priced at several thousand yen. However, after the introduction of casual sushi-go-round restaurants, people can enjoy reasonably priced sushi more often. At izakaya (Japanese-style pubs) or at the supermarket, a sushi meal/box is priced under 1,000 yen. Such inexpensive sushi is made by machine, which does not require the experienced master’s skills or knowledge, and the freshness of toppings cannot even be compared. There are many ways to enjoy sushi, including large portions at a fishery port eatery, reasonably priced sets in the deli section of a supermarket and authentic traditional sushi accompanied by sake at a fine Japanese restaurant. 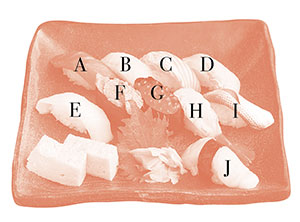 A. Maguro (tuna)
Maguro is probably the most popular of all sushi toppings, not only in Japan but also overseas. Maguro, a red meat fish with a simple flavor, is high in protein and low in fat and calories. It is considered the king of sushi in Japan. Top-quality tuna is called toro. Toro is the belly or back meat of a tuna, and only a small amount of it can be found in any given fish. Preferring warm water, tuna populate the seas around the Okinawan Islands, and a large number of tuna are caught off the main island.

B. Shiromi (white fish)
Shiromi is one of the most popular sushi toppings with its smooth texture. Depending on season, different kinds of white meat fish are used in sushi, such as hirame (flounder), suzuki (sea bass) and tai (sea bream).

C. Sake (salmon)
Sake is not what you might think it is, although the name in English looks like that of Japanese liquor (sake). It has a rich taste and fatty meat.

D. Madai (red sea bream)
Tai (sea bream) is eaten for celebrations in Japan as it is associated with medetai, meaning auspicious in Japanese. Tai is the most common white meat fish used in sushi.

E. Ika (squid)
Fresh ika is white and can be a bit chewy, but it is quite sweet.

F. Uni (sea urchin)
Uni is served as gunkan sushi, a rounded mound of rice wrapped in seaweed (nori) upon which a topping is placed. This is one of the most expensive items on a sushi menu.

H. Ebi (prawn)
Ebi is recommended for sushi beginners because it’s often served cooked or steamed. Amaebi, which means sweet prawn, is eaten raw. It lives up to its name and also has a pleasing texture.

I. Kohada (gizzard shad)
Silver-skinned fish are often served with vinegar in sushi toppings. Many sushi connoisseurs are big fans of silver-skinned fish, including kohada, sardines and mackerel. To become a sushi expert, you cannot miss out on them.

J. Hotate (scallop)
Fresh hotate has a chewy texture and is quite sweet when served very fresh.