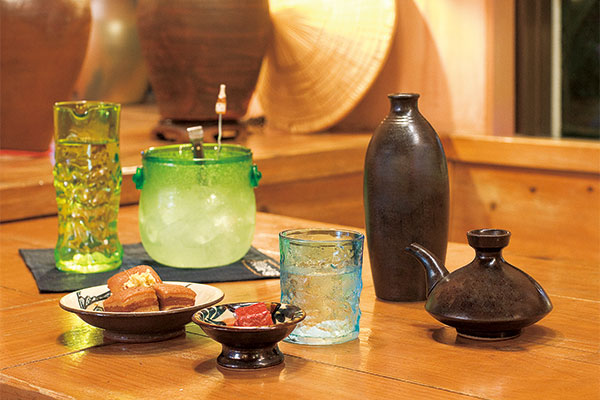 As with sake, a traditional measure of awamori is one go (0.18 liters). Awamori is commonly served in clay vessel called a karakara, specially designed for awamori. Using a karakara and Ryukyu glass, you can enjoy awamori in a truly Okinawan style.

Awamori is to Okinawa as soju is to Korea. Awamori is a type of shochu -- a Japanese liquor made from barley, sweet potatoes or rice -- and it is an indispensable element of traditional rituals and everyday life in Okinawa.

Okinawan awamori dates back more than 500 years. During the days of the Ryukyu Kingdom, awamori was an important import to the Japanese and Chinese governments.

Awamori is a distilled alcoholic beverage made from rice, mainly indica rice imported from Thailand, and with no food additives. This Okinawan liquor is produced using fermented rice malt made from steamed rice and black koji mold, and it is this black koji mold that gives awamori its distinctive and pleasing aroma.

Awamori that has been aged for three years or more is called kusu. The maturation process gives a more refined and mellow flavor to awamori, and generally, the older the awamori, the higher the price it commands.

Okinawa has 48 awamori distilleries, each of which offers various brands of awamori with different flavors. Most distilleries have a tour that gives you the opportunity to observe the awamori distilling process and also to sample their products.

Awamori prices vary widely, and typically a one sho (1.8 liters) bottle of awamori is sold for 1,500 yen to 2,000 yen in supermarkets and liquor stores, while a small bottle of awamori (720 ml) sells for about 1,500 yen in pubs. People enjoy awamori in many different ways, including with water and soft drinks.

Due to the fact that awamori is sugar free and has no amino acid content, it has a lower calorie level than other similar alcoholic beverages, making it a popular choice for people with high blood sugar.

Awamori is admired by people of all ages and is featured in many all-you-can-drink bars and restaurants. One big benefit of drinking awamori is that it does not cause bad hangovers like many other hard liquors. Once you start enjoying the taste of awamori, you are one step closer to understanding the real Okinawan spirit. The perfect way to have a real awamori experience is to go to a cozy, laid-back restaurant and sip kusu with seasonal dishes. In Okinawa, turmeric is commonly used for hangovers as it helps liver function. 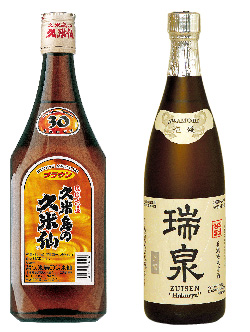 Awamori catching on overseas
Awamori has recently been gaining in popularity abroad following the success of sake and shochu. Zuisen Hakuryu (approximately $20) is sold in the United States, mainly in New York City and along the eastern seaboard. It is a popular brand with a deep sweet flavor and mild aroma created by eight years of aging. Kumejima’s Kumesen, which is produced on nature-rich Kumejima, is also a popular name abroad. The producer started to sell it in Europe and Asia four years ago. Will a boom in Okinawan cuisine and awamori follow the one experienced by Japanese cuisine and sake? 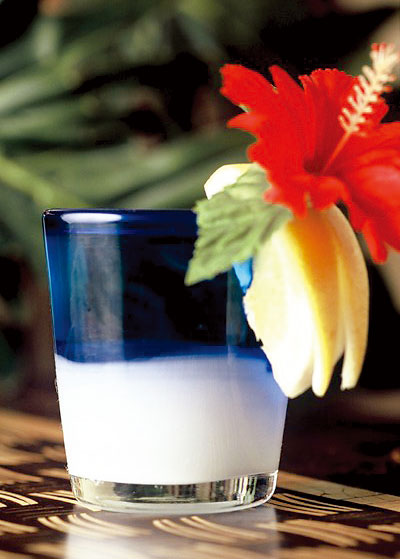 The certification of awamori meister indicates a knowledge of alcoholic beverages, in particular awamori. Bartenders with this designation mix a wide variety of awamori cocktails at hotels and bars in Okinawa 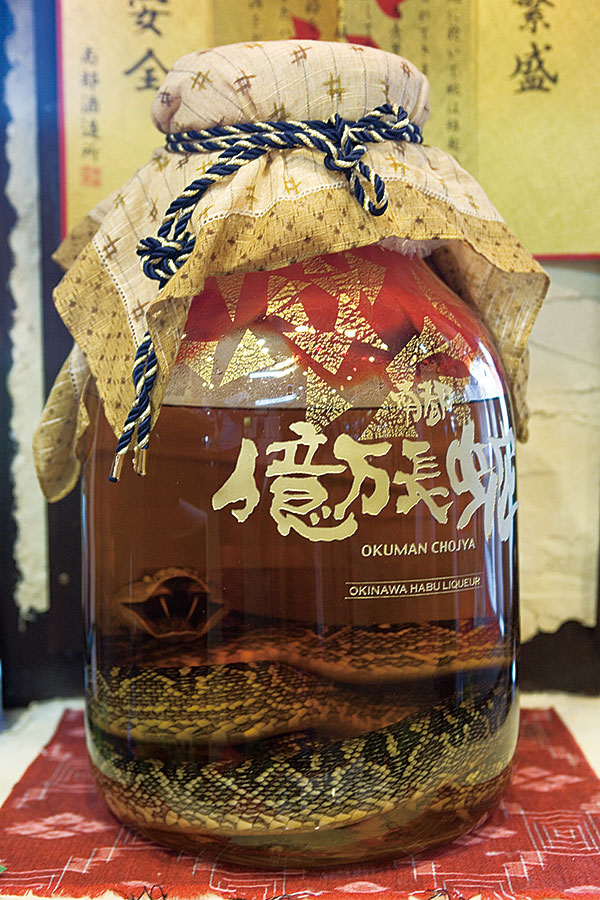 Habu-shu
In Okinawa, habu-shu is believed to be an effective restorative. Habu-shu that comes with the habu itself costs 10,000 yen to 100,000 yen, while a bottle without the snake can be purchased for several thousand yen.

Donan
Yonaguni Island, one of the Yaeyama Islands, is the westernmost point of Japan. The island is known as the only place in the country where you can purchase drinks containing liquor with an alcoholic content higher than 60 percent. Donan is a pure awamori from the first part of the distillation process with an alcoholic content above 60 percent.