Okinawa's beautiful waters are home to a rich variety of marine life, including species that are hazardous to humans. When going to the sea, it's important to know about the potential dangers lurking in Okinawa's underwater world; however, it may not be possible to completely avoid injuries from dangerous marine creatures. It’s best not to touch unfamiliar marine animals even if they look cute and harmless. Some species can give severe stings causing extreme pain and also difficulty in breathing. If you’re injured by a marine creature and start feeling short of breath, dial 118 or 119 to call for an ambulance.

The box jellyfish, which swarms in the waters around Okinawa during the months between May and October, is difficult to spot as they are almost invisible underwater. You may not realize the presence of box jellyfish until you yourself get stung by one. Box jellyfish stings occur especially in the calm waters surrounding inlets and artificial beaches. A sting by a box jellyfish can lead to death in some rare cases, and more than a few fatal box jellyfish stings have been reported in Okinawa.

When enjoying marine/beach activities in Okinawa, it's always a good idea to watch out for the dangerous marine creatures listed below.

Helpful tip: Wearing a long-sleeved rash guard provides protection from dangerous sea creatures as well as from the sun. 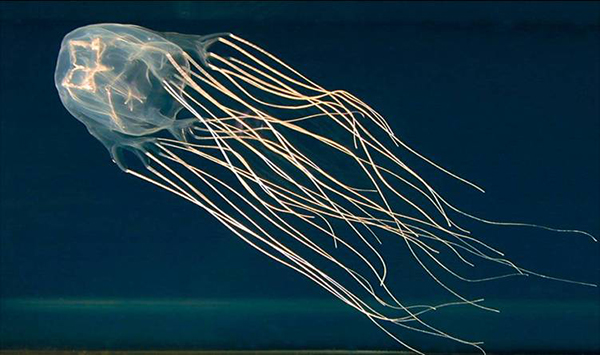 The box jellyfish lives in the seas off Okinawa. Shaped like a cube, it has a diameter of 10 centimeters (4 inches) and long, flexible arms. Its semitransparent body makes it difficult to see with the naked eye. A sting by a box jellyfish can cause severe pain all over the body along with a welt on the skin. In the worst case, the sting can prove fatal. If you are stung by a box jellyfish, do not rub the wound; remove its tentacles first, put vinegar on it and cool with ice or cold water, followed by medical treatment. 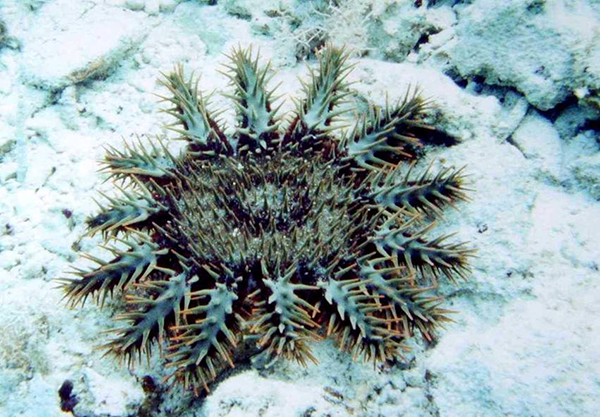 This starfish has a red body covered in spines that contain venom. With a mouth in the center of its body, its stomach secretes digestive fluids and it eats live coral and fish nests and sometimes attacks humans. A sting can cause severe pain, swelling, nausea and paralysis. The affected area should be soaked in hot water between 40–45℃ (104–113F) for 30 to 60 minutes. Remove spines completely and sterilize the area to minimize the risk of gangrene. 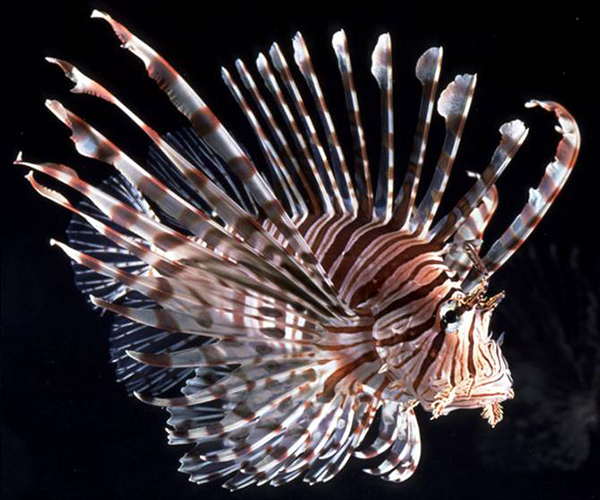 This venomous fish measuring 30 centimeters (12 inches) has venom on its dorsal fin. Handling the creature can result in severe pain, swelling, nausea or paralysis. In the event of an attack, squeeze the venom from the wound, soak the area in hot water between 40-45 for 30–60 minutes and seek medical treatment

Measuring 70-150 centimeters (28–60 inches) in length, this fish has a blue body tinged with yellow and black stripes. It is poisonous, 20 times more so than the habu, Okinawa’s indigenous poisonous snake. Once you bitten by this sea krait, you will have a hard time breathing in 20-30 minutes, decreased in blood pressure and paralysis of the entire body. Tie the upper part of the affected area with a towel or something capable of absorbing the poison and go to a hospital immediately. The application of black tea or Japanese tea to the affected area will help to sterilize the wound.