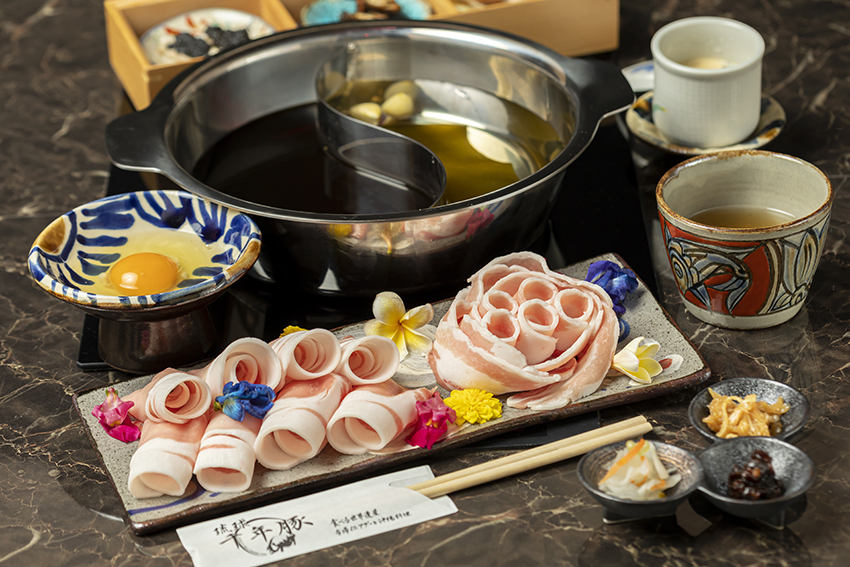 Okinawa being an island, you would be forgiven to think that the traditional staple food here is fish or seafood, but you would be wrong. Although people eat plenty of fish and seafood these days, traditional Okinawan cuisine is built around pork. There's even a saying that "Okinawan people eat everything related to pork except its oink!"

A pork breed native to Okinawa is called "agu," which, according to connoisseurs, has a meat quality superior to most pork currently on the market, with its marbled meat having sweetness to it and its fat with plenty of umami.

Agu was introduced from China about 600 years ago and developed into a small "island pig" bred by Okinawan people. It made the basis of Okinawa's food culture for a long time, but the Battle of Okinawa at the end of the Second World War destroyed much of the local livestock, and the number of agu decreased sharply. Furthermore, after the war, large Western varieties that grew faster than agu were introduced from Hawaii and elsewhere in the United States, and the number of small and slow-growing agu decreased. Its hybridization by crossbreeding with Western varieties also progressed to the point that most people believed agu had become extinct.

The Nago Museum, conducting a prefectural survey of agu in 1981, discovered and confirmed about 30 agu existing. Eighteen of them were given to the care of the Prefectural Northern Agricultural and Forestry High School, and backcrossing was carried out for nearly ten years to remove the hybridization. Eventually, their numbers increased enough for them to become commercially viable. Gradually, the number of specialty stores and restaurants offering agu meat dishes, such as Agu Shabu Shabu, has increased.

Agu is much smaller than an average modern pig and grows slowly as an adult agu pig weighs about 110 kg, whereas ordinary pigs weigh 200-300 kg.

The temperature at which its fat melts (fat melting point) is 38.1 degrees lower than ordinary pork (LWD). Therefore, it literally melts when you put it in your mouth. Therefore, agu is incredibly delicious to eat in shabu-shabu style.

Of the many agu brands on the market, more than 90% are hybrid types created by crossing native agu with western breeds like Berkshire or Duroc or white pigs like Large White or Landrace because they are easier to feed and breed.

The pure island pig "Nakijin Agu" is bred mainly by younger farmers who dare to raise the traditional agu and market it as an essential ingredient to the food culture peculiar to Okinawa. The pure breeds are known as a rare value agu.

Compared to ordinary pork, it has low cholesterol and is rich in amino acids, which are umami ingredients. Therefore, when plans arose in 2010 to export agu to France, the French experts evaluated it as comparable in quality to Iberian pigs and French  Mangalica.

Agu is an Okinawan delicacy that you want to eat at least once.