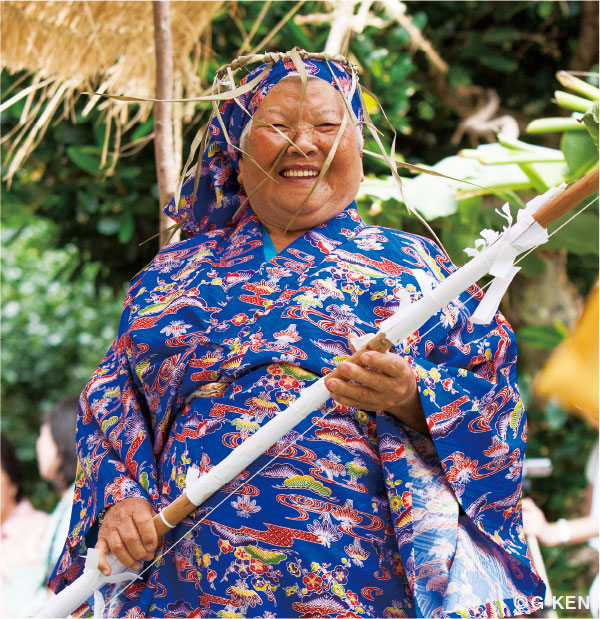 Aug. 15, 1945 marked the end of World War II. At the same time, however, Okinawa was suddenly separated from mainland Japan and entered a new era under U.S. administration. Although the Okinawan people had to rebuild from the rubble, they always had their own native music to heal the wounds and suffering that the war had inflicted on them. Whether they were happy or sad, they always dug deep and came up with music from the heart. Regardless of whatever difficult situation they have found themselves thrust into, the people of Okinawa have always maintained a culture that cherishes music and dancing. Mo-ashibi, the traditional Okinawan beach party, is one such historical artifact where young men and women would gather after dark for singing and dancing. Though time has moved on and mo-ashibi is largely a thing of the past, the sanshin and traditional Ryukyuan dancing and singing are indispensible features of local festivals. At these events, when the kachaashii (Okinawa’s representative folk dance) accompaniment strikes up, the audience of young and old – hitherto full of anticipation – joins in and begins to dance, waving their hands left and right above their heads in the time-honored fashion. To witness this is to catch a glimpse of the heartbeat of Okinawa. The only Japanese to suffer the horrors of a land assault during the war, the people of Okinawa have overcome the pain of their past through the spirit of helping one another and their optimistic outlook that “things will work out, somehow” (nankurunaisa). Having this reputation for overcoming difficulties and past grief, Okinawa is known as the “Island of Healing.” Seeking rest and relaxation themselves, over 5 million visitors come to Okinawa each year and are refreshed by the beautiful natural environment of the island and by the kindness and warmth of its people. Although 40 years have passed since Okinawa reverted to Japan, an event-filled history renders the people’s philosophy of "Nuchidu takara” (there is nothing you can do once you die, or literally, life is a treasure) invincible and backs up the spirit of kindness and warmth that prevails on the island. Interacting with such people will leave you something to remember from your stay in Okinawa.