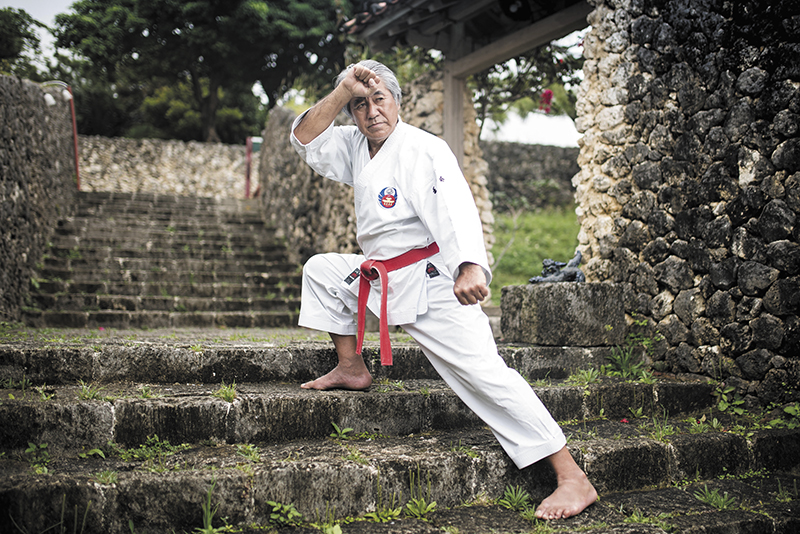 Although widely considered to be Japanese, karate's origins, to the surprise of many, including people from Japan, actually belong to Okinawa, or the Ryukyu Kingdom as it was known before 1879. The kingdom existed at the thriving nexus of trade between Japan and the Asian continent and, among many other material, cultural and artistic trappings from abroad, martial techniques, particularly from China, were absorbed into native systems. Originally called te (“hand”), karate, (literally, “empty hand”) took on its modern name relatively recently. Although several kobudo (weapon) systems also exist in Okinawa, using, for instance, nunchaku – the deadly articulated club made famous by the legendary Bruce Lee – the bare essence of Okinawan martial arts exists in the hands, fists, feet and elbows of karateka (practitioners). One of karate's hallmarks is its no-frills effectiveness. Blocks, punches, kicks and other moves are designed for a minimum of wasted energy, giving karate's focused power potentially deadly results. For this reason, an almost universal dictum in dojos everywhere is that the combat aspects of karate should be used only for defense. By the end of the 20th century, karate had been endemic in mainland Japan for almost a century and had spread across the world. Now, there are 50 million karateka worldwide, whose ryuha (systems) are descended from Okinawan roots. Today, Okinawan karate is represented by three venerable main ryuha, Shorin-ryu, Goju-ryu and Uechi-ryu, all of which are enjoying a surge of interest thanks to people like Kenyu Chinen, a master of Okinawa Shorin-ryu karate, president of the World Oshukai Dento Okinawa Shorin-ryu Karatedo Kobudo Federation and co-founder of the International Karate Study Center in Yomitan Village. Chinen Sensei has traveled the world for 40 years, running karate workshops, classes and seminars. This outbound influence is mirrored by an increase in people traveling to Okinawa to study what many consider to be the original karate. “Like many, I saw too many martial arts/action movies as a kid,” said Kevin Chaplin, a 36-year-old staff instructor at the World Oshukai Federation when asked how he got into karate. In his native UK, young Kevin entered his first dojo at the age of 12. He received his black belt at what he calls a modern Japanese dojo. “It was great and everything, but I started to feel that there was something missing,” he said, emphasizing that he was speaking strictly for himself. “I noticed a shift going on in the karate world toward competition or show – like tournaments or of kata [stylized forms or exercises]. There's nothing wrong with that, of course, but I wanted to learn karate's original purpose: self-defense.” He moved to Japan and found what he was looking for in Chinen Sensei and the World Oshukai Federation. In Okinawa, he apprenticed under Chinen Sensei and applied himself to several years of training. Now, Kevin teaches adult and children's classes at the federation's two dojos in Okinawa. What Chaplin's experience and the organization he represents illustrate are the new opportunities to study Okinawan karate that have come about recently. Near Naha Airport in the city of Tomigusuku a beautiful new complex now stands as a testament to Okinawa's original martial art. The Okinawa Karate Kaikan is a 3.8-hectare facility, built by the Okinawa prefectural government for the purpose of perpetuating and preserving Okinawan karate. The kaikan features practice halls, meeting/conference rooms, karate library, exhibition area and the beautiful Shurei Hall – a red-tile roofed structure featuring a deluxe dojo and outdoor training area. In the private sector, trial classes at Okinawa's top dojos can now be booked online. There are also “experience classes” that can be arranged easily at facilities such as the International Karate Study Center in Yomitan Village, one of the dojos where Chaplin teaches. Here, groups or individual karateka of any level can rent a dogi (practice uniforms) and take personalized lessons in the traditional art, in a picturesque Okinawan dojo. After more than a century of increasing popularity around the world, Karate's fame may have transcended international borders, but its origins, and future, are intrinsically locked with its ancestral home: Okinawa. 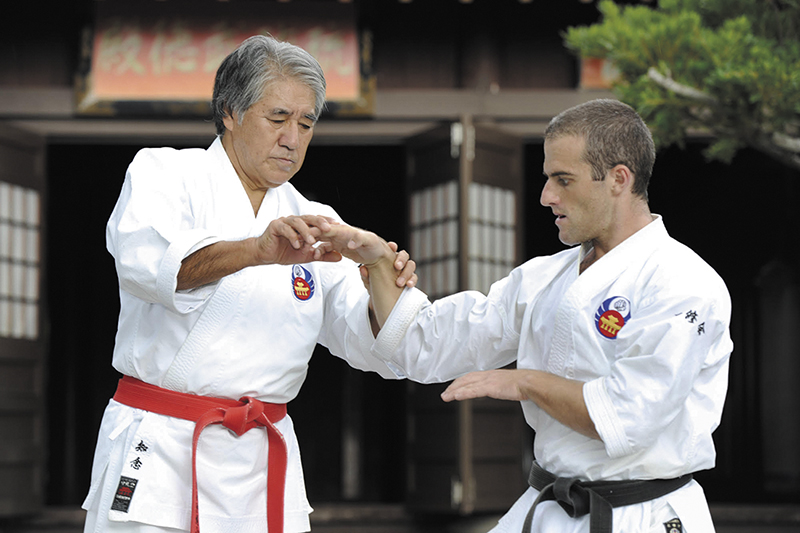 Naha's Dojo Bar is a karate-themed bar and restaurant and known as the friendliest dojo in Okinawa. The kobudo (weapons) and other karate memorabilia hanging from the walls offer a unique ambience where martial artists and non-martial artists from all over the world can gather to share experiences, good food and an excellent drink selection.