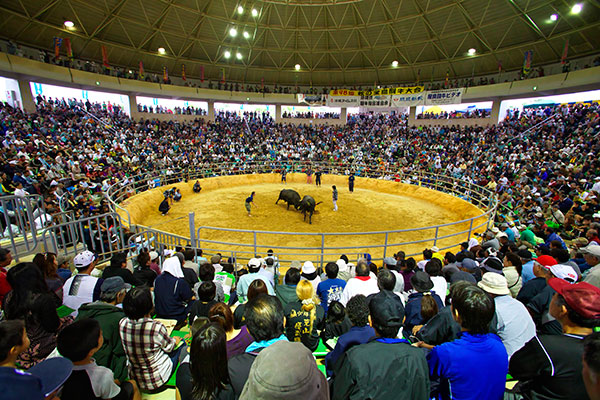 Bullfighting is a unique cultural feature of Okinawa. It has existed as local entertainment for over 100 years and also survived during the difficult days of World War II. In an Okinawan bullfight two bulls are matched against each other, unlike Spanish bullfights, where a matador faces the bull. Matches are not orchestrated, resulting in a true test of bovine strength and endurance. The popularity of bullfighting started to wane in the ’70s, but in recent years it has experienced a revival and has become a popular tourist attraction. A match ranges from a quick one that finishes in a few seconds to a heated battle that stretches out to over half an hour, which causes tournament length to vary from two-and-a-half to four hours. One bull wins the match when his opponent runs away. In fighting, the bulls demonstrate their own special moves to beat the opponent. A well-done technique resulting in victory prompts the audience to enthusiastic roars. 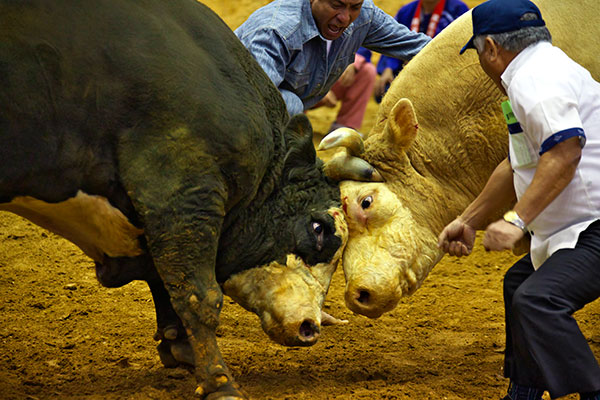 The bulls come from various parts of Japan and number about 600 in total. They debut at the age of 3 or 4 years and reach their bullfighting prime when they are 6 to 8 years old. Most of them retire around the age of 10. Bulls fighting in Okinawa weigh approximately one ton and are huge compared to bulls used for bullfighting in Spain, which average 500 kilos or less.