History of Ryukyuan dance and kumi-odori 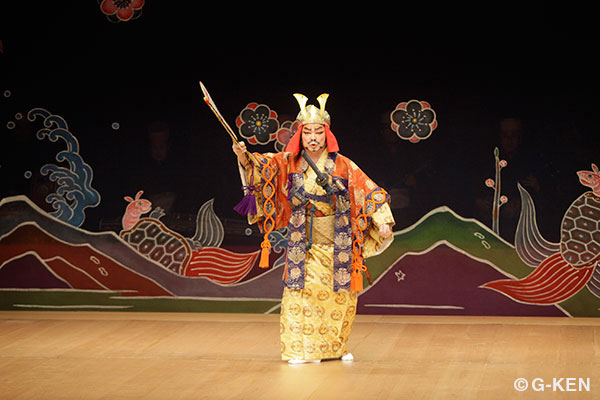 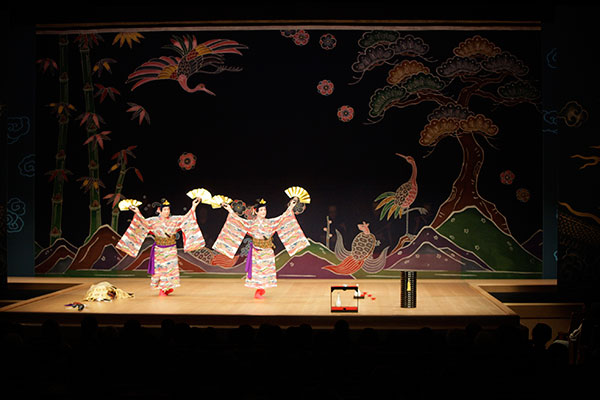 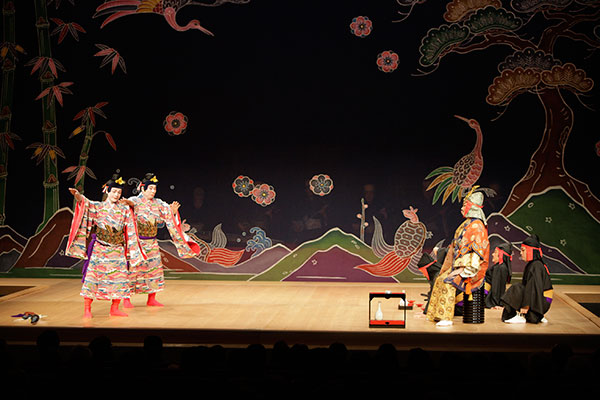 While Noh, a traditional Japanese theatrical form, is well known as Japanese-style opera, Okinawa also possesses a type of classical drama, Ryukyuan dance, which features dance, music and dialogue and is often compared to Western opera. Advantageously positioned amongst China, Southeast Asia and Japan, the Ryukyu Kingdom flourished in its day. Absorbing the best elements of those cultures it encountered, Ryukyu itself gave birth to a rich culture based on its own sensibilities and aesthetics. The symbol of said culture is undoubtedly traditional performing arts -- particularly Ryukyuan dance. Okinawan dance is divided into four styles: court dancing known as Koten-buyo (classical dance); Zo-udui (mixed dance), which appeared in the latter half of the 18th century depicting the experiences of the common people; Sosaku-buyo (created dance), choreographed by modern dancers; and Minzoku-buyo (folk dance), locally passed from one generation to the next.

Another performing art with a long history, kumi-odori (ensemble dance), is the theatrical expression and arrangement of short songs handed down from generation to generation. Content is roughly split into two categories -- that of mundane topics such as romance, familial love, coming of age, etc., and that of violent revenge killing. With the slow, measured rhythms of Noh and Kabuki, a fluid beauty of movement and costuming, performances loaded with silent expression of emotion through contrasting mild and intense displays, this Okinawan-style opera is regarded as an intangible cultural property of Japan. 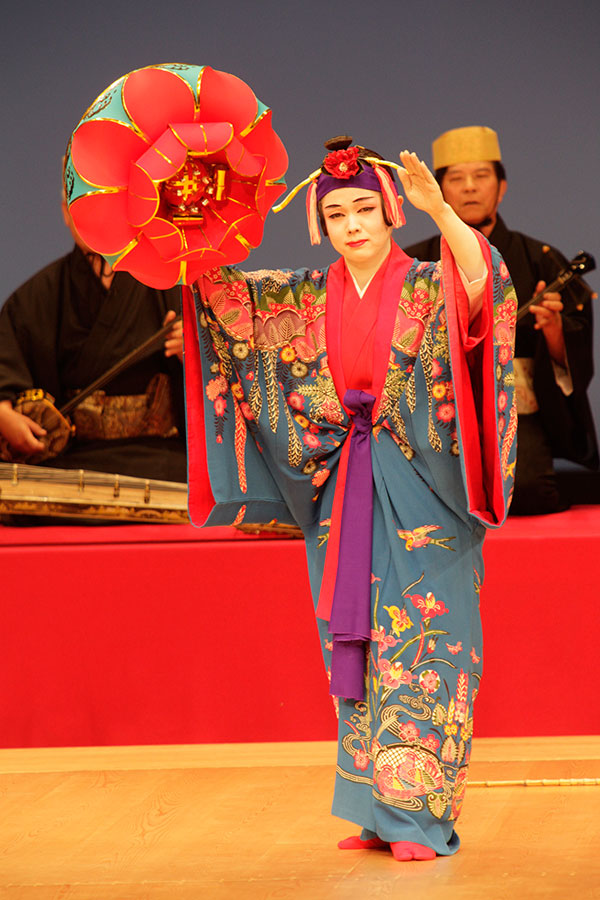 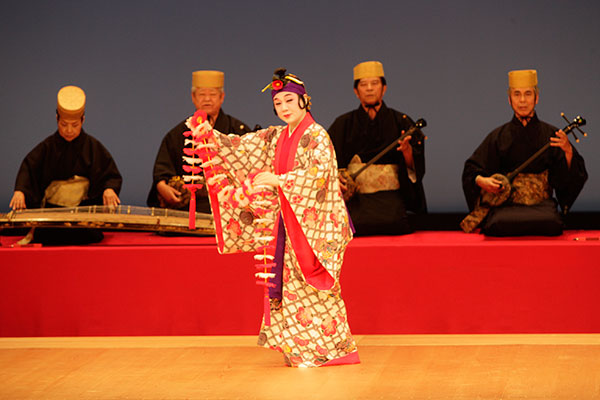 ‘Amawari’
This is the tale of Amawari, a heroic adventurer and the lord of Katsuren Castle, who overcomes the socio-political upheaval of the unification of the Ryukyu period with the vigor and intensity of a typhoon. The two sons of Gosamaru, lord of Nakagusuku Castle, play the villains as they try to kill Amawari to avenge their father.

Yotsutake is the most important classical dance in Okinawa. A woman dancing in a bingata kimono and a large red lotus hat is exactly what most Okinawans imagine when they think of Ryukyu dance. An integral part of classical women's dances, an extravagance of color and intricate designs serve as a symbol of Ryukyu culture.

Yotsutake and other modern choreographies are relatively easy to see at places such as Shurijo Castle Park and also at local festivals and events, but Kumiodori is seen only at the National Theatre Okinawa, which is expected to become a traditional culture hub for the Asia/Pacific region, or at the Shurijo Castle Mid-Autumn Celebration, held annually in September. Through the music and dances, you will be able to catch a glimpse of the Okinawan soul. 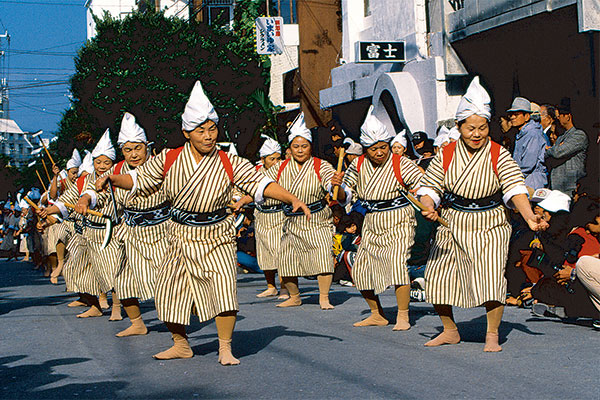 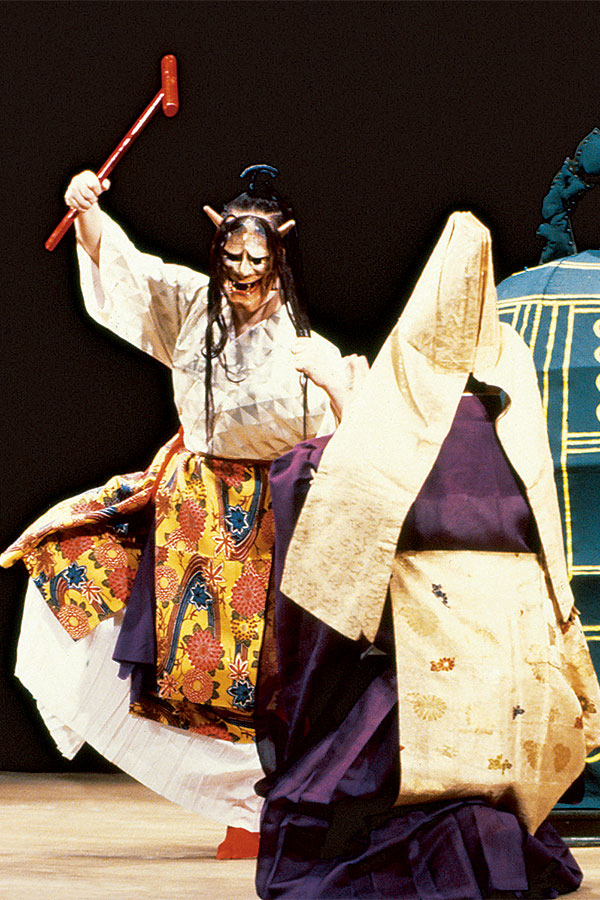 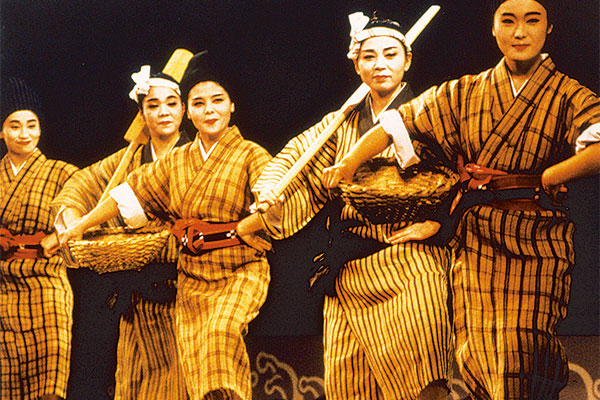 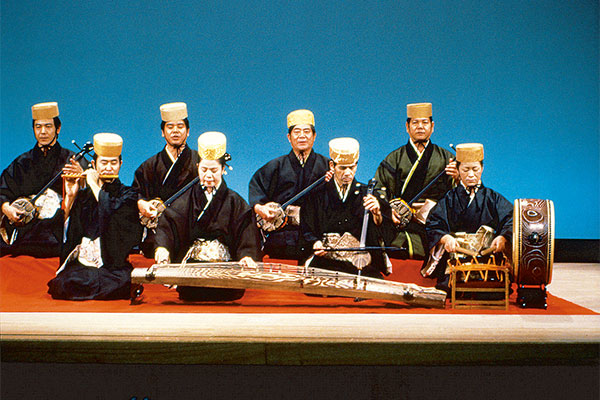 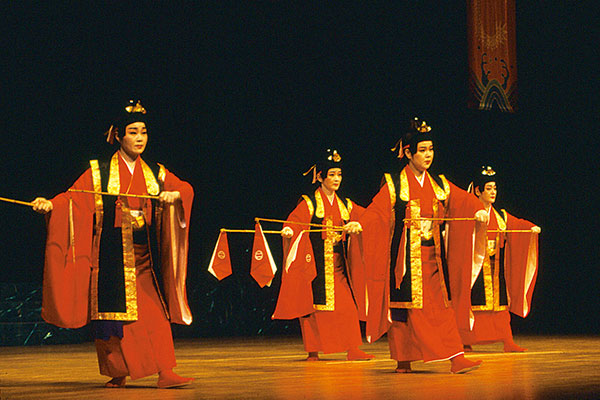