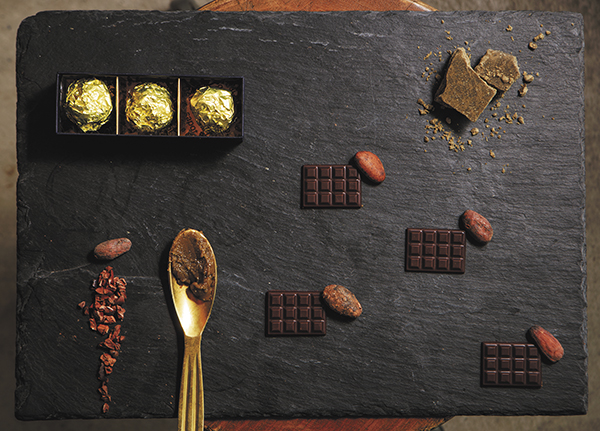 When the first bean-to-bar-style chocolate specialty shop, Timeless Chocolate, opened at Mihama Depot Island in Chatan Town in 2016, the news spread quickly throughout Okinawa. Exploring exploring the combination of Okinawan sugarcane and cacao beans, which have a different flavor depending on their country of origin, Masayuki Hayashi operates a bean-to-bar chocolate factory – part of a recent trend -- and shop in Chatan. The branding which captures that essence and the taste of chocolate created using only cacao beans and sugarcane have sent a whirlwind throughout not only Okinawa but also the entire nation. Timeless Chocolate is a must-see place if you’re visiting Okinawa

The entire process of chocolate production takes place at this factory – from handpicking cacao beans for roasting to cracking, in which the beans are crushed and shells removed; conching, in which chocolate particles and powder are turned into thick paste; and the final step, called tempering. It is only after going through this long, painstaking manual labor that fine chocolate with a crispy, “punchy” texture is produced.

Inside the shop, with its industrial décor, there is an assortment of products ranging from beverages including frozen drinks to homemade chocolate sweets such as brownies, biscotti and chocolate cakes, as well as cacao beans.

About 10 years ago when Blue Bottle Coffee started to appear and micro roasters became popular, Hayashi moved to San Francisco and lived there for about a year. During that time he became interested in West Coast culture and the coffee industry. Inspired by the profoundness of coffee culture such as the differences in taste ranging from bitter to sweet, Hayashi went to Melbourne, Australia, where he pursued his interest in espresso and even earned a barista certificate. It was there that he first noticed the “compatibility between coffee and sugar.” Coffee tastes completely different depending on the type of sugar added. That led to his interest shifting to sugarcane. Moving to Okinawa, the southernmost prefecture in Japan where sugarcane is grown, marked the beginning of a new challenge in his life.

“I went around tasting the differences in sugarcane flavor, traveling to islands or having samples sent to me. Brown sugar in Tarama Island contains a lot of minerals, while that in Aguni Island smells like vanilla, and that in Ie Island tastes like acidic fruit with a tinge of saltiness. All of these things change depending on the cooking method and the variety of sugarcane used. I had been thinking that as long as I am doing it in Okinawa, I should take advantage of materials of Okinawan origin. Sugarcane is what I ended up with, and chocolate is the culmination of that pursuit,” said Hayashi.

Now that slightly more than a year has passed since Timeless Chocolate opened in Mihama, Hayashi’s quest for raw materials has further deepened, and he is currently trying to cultivate cacao on one of the remote islands of Okinawa. This man has always been passionate about creating new things that are better, and he enjoys taking on challenges that he finds interesting. His challenge will continue until he completes the creation of chocolate made entirely using raw materials from Okinawa, and even beyond that, more interesting things are likely awaiting him. 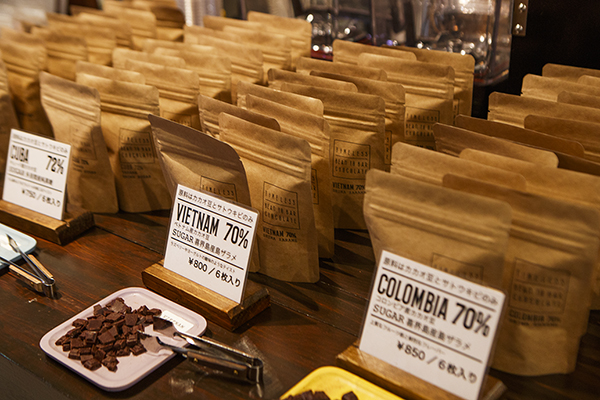 Four types of home-roasted cocoa beans are offered here. All the chocolates that have a rum-like Cuban flavor or other flavors that depend on the cacao bean production site and roasting method are quality items, allowing adults to enjoy the authentic taste, even if slightly expensive, only because they are created through a process that takes full advantage of the characteristics of the select raw materials and ingredients.