‘I enjoy sailing to beautiful islands with my fun-loving friends’ 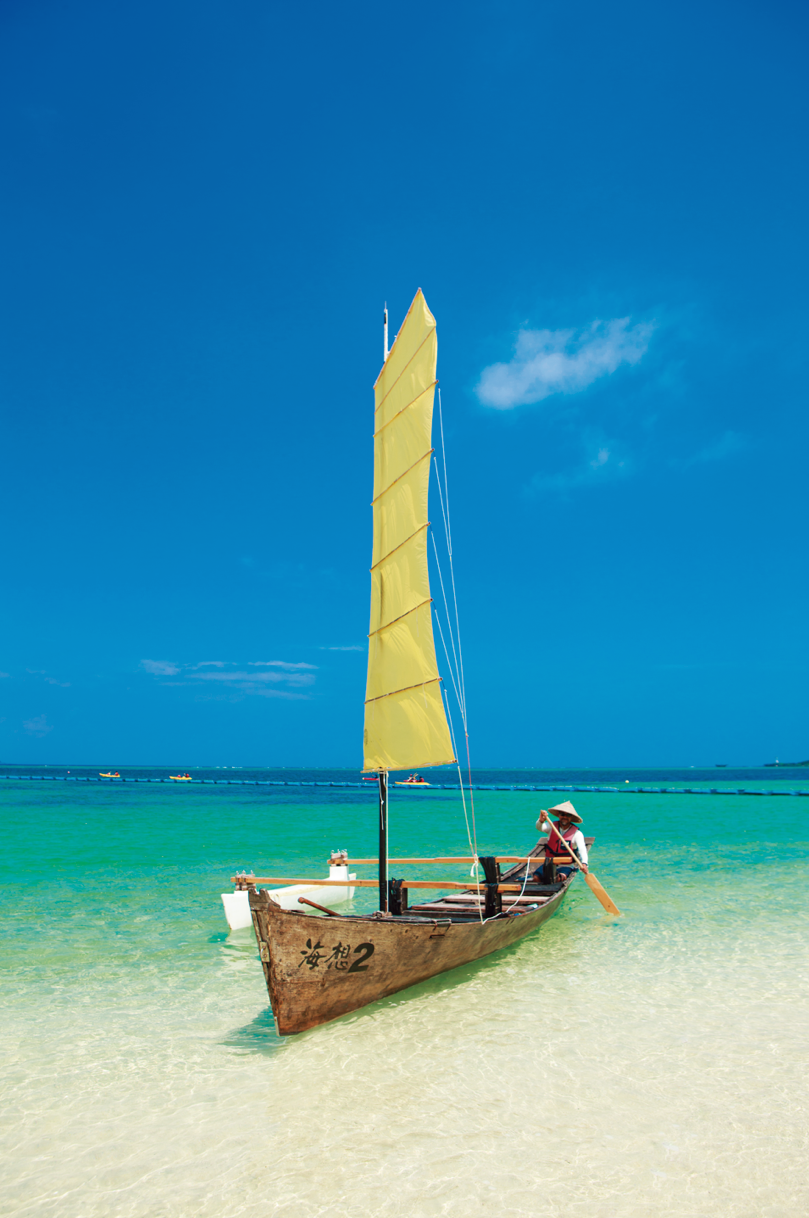 There is a group of sabani enthusiasts who belong to a team called Fukaki Sabani. They have been making unbelievable attempts at sailing on a fukaki sabani for 820 kilometers from Okinawa to Miyazaki Prefecture in Japan’s Kyushu region, across an ocean where the Kuroshio (Black Current) flows, getting hit at times by five-meter-class waves. Leading this team is Yoji Mori, who has continued this challenge as he wants to show the world the potential of the sabani. The members of this team, which includes a woman, are people who have all been captivated by the sabani.

On their first voyage in 2005, the team sailed 150 kilometers for five days from Okinawa to Okinoerabu and Tokunoshima islands. Since then they have been sailing every year, gradually extending the route. These are voyages on the sabani that have taken them to various islands, just like the voyages of the Okinawan people who used the sabani for their livelihood in the past.  At times the team has been forced to cancel their voyage due to a typhoon. In 2010 the team sailed 300 kilometers for seven days across rough waters from Yonaguni Island to the islands of Iriomote, Tarama and Ikema. In 2011 the team departed Motobu Port on the main island of Okinawa, sailed to 11 islands of the Nansei (Southwest) chain and completed their 820-kilometer voyage to Miyazaki Prefecture, which took about one month. Half of that time, storms and typhoons slowed them down, but the team members admitted that they felt anxious during the passage from the Tokara Islands to Yakushima Island as they were made aware of the presence of the Kuroshio (Black Current). Every time a big wave hit the side of the sabani and water poured in, the crew in the back bailed out the water while the others kept paddling. They apparently experience a paddler’s high, repeatedly being lifted to the crest of waves and dropped down to the trough. Sometimes, they started paddling before sunrise, while at other times they spent the night on top of the sabani under the moonlight. The sight of the sun rising on the horizon, enveloping all visible things in the morning glow, or the scene of the blue light of the sparkling sea making the surface of the water look beautiful under the dark sky on the night of a new moon… Only those who have successfully completed such a tough voyage can experience this emotion.

It is Mori’s duty to constantly remain alert to unexpected changes in the tide and the wind, and thereby determine the route of the voyage. Declining accompaniment by an escort boat, the only thing they bring with them is a GPS communicator. Therefore, instead of just trying to constantly move forward, Mori gives priority to safety and makes his decisions, always maintaining a calm mental attitude and abiding by the rules of Mother Nature. Mori’s team has raised the bar for their sabani voyage every year. It is probably because they never broke nature’s rules that they have never had an accident thus far. Mori says, “I feel that it is truly regrettable that these sabani are used only for races.” From this comment, we can sense his confidence and passionate feelings that have been shaped by various experiences that go beyond our imagination, such as the bonds that developed among his team members sharing their destiny aboard a small seven to eight-meter boat and memories of meeting people on the islands where they landed. Try to get as many people as possible to want to revive the sabani and ride on these boats… This is what Fukaki Sabani aims at. The group has been organizing picnics and various events for experiencing sailing on a sabani in order to pass on this culture down to future generations. 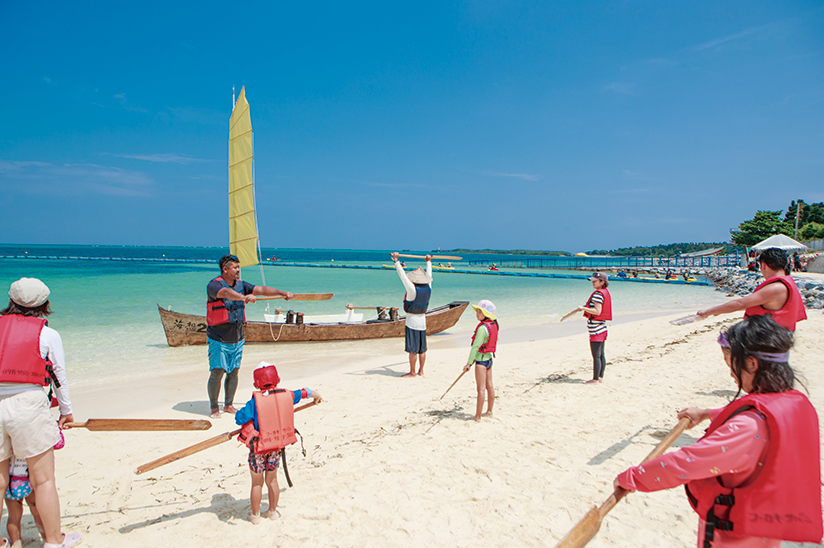 Mr. Mori not only hosts but also takes part in a number of events, especially in the north of the island, devoting himself to passing down the art of sailing a traditional Okinawan boat known as a fukaki sabani. Riding in a sabani can be enjoyed at Ocean Expo Park’s Emerald Beach in August. The experience is free of charge, but space is limited, so register early on the day of the event. 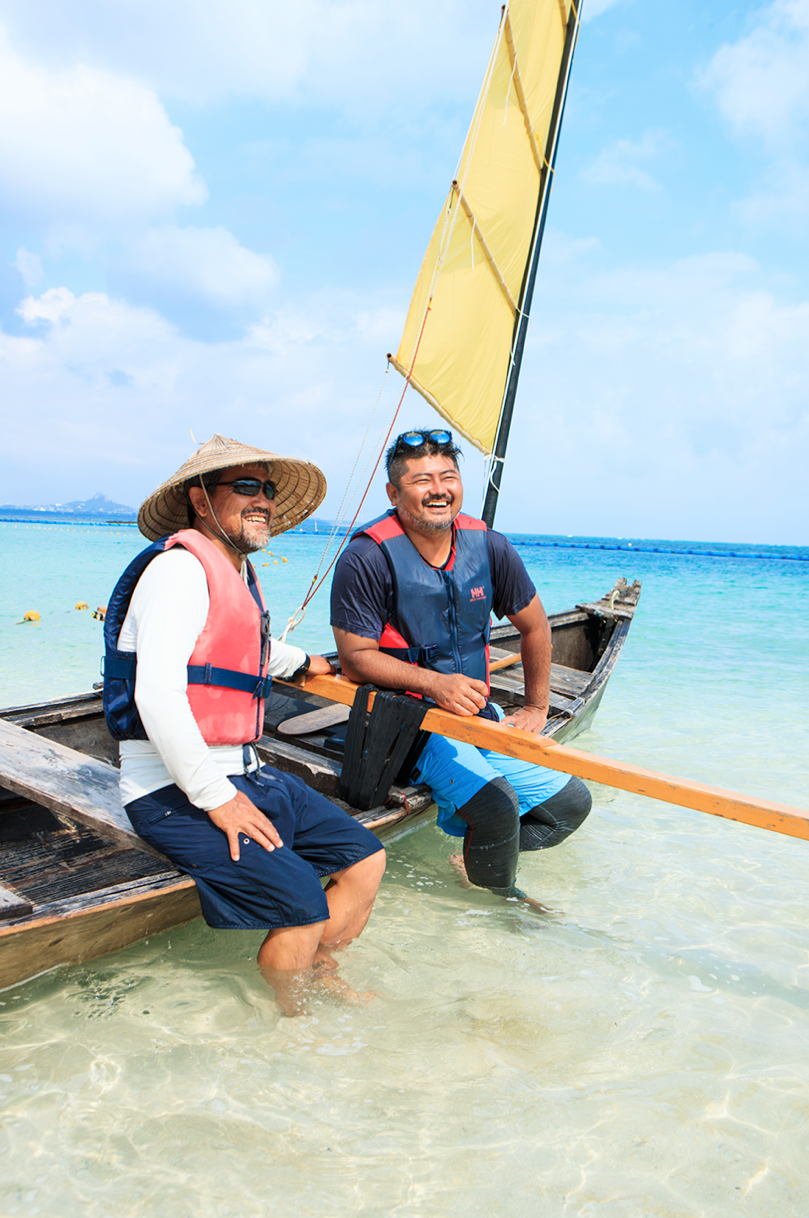 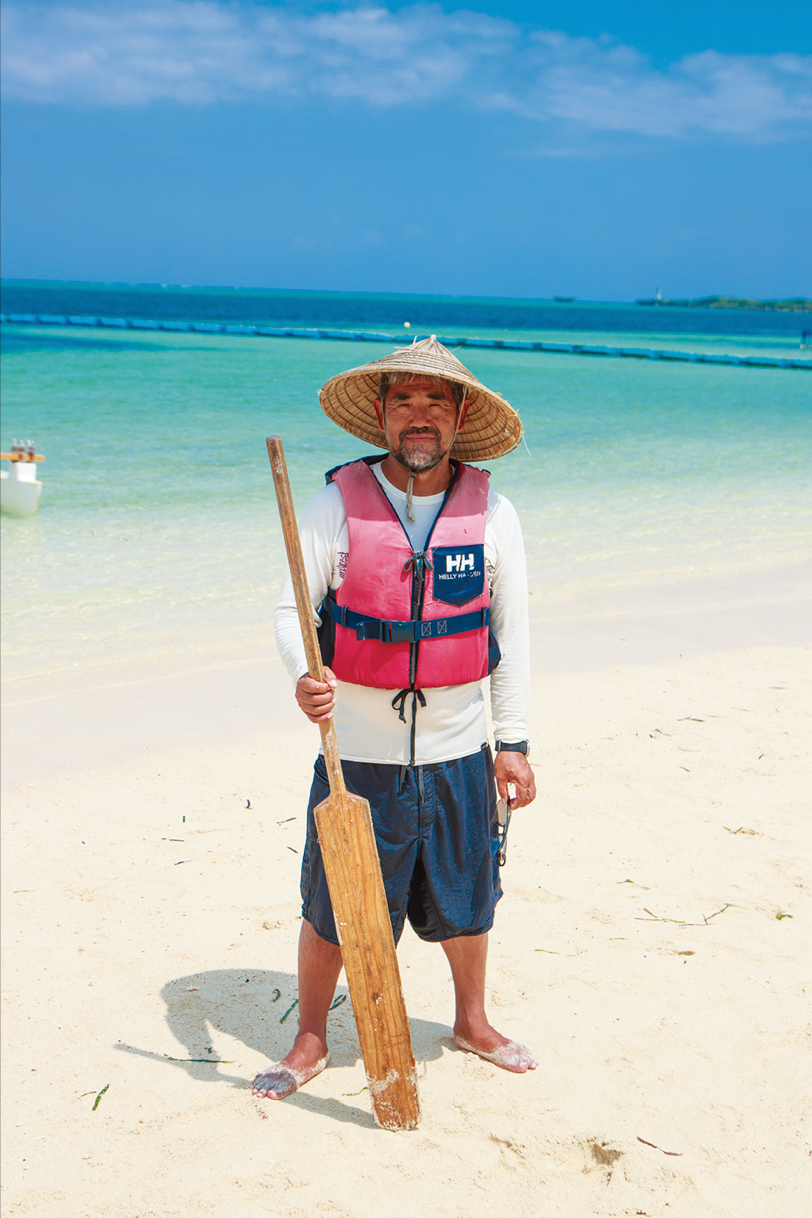 Yoji Mori: leader of the Fukaki Sabani team
“I am not an adventurer,” says Yoji Mori, who sails on a fukaki sabani, a traditional Okinawan sailboat, for hundreds of kilometers on the ocean where all he can see is the horizon, relying only on physical strength and the wind, without being accompanied by an escort boat. At times, his sabani sails for more than 200 kilometers with almost no paddling, but once the wind subsides, he needs to paddle it like a kayak.