Treasures of the Earth and Mankind

In 1972 UNESCO established The World Heritage, singling out natural, cultural and historic sites around the world in order to preserve them as precious properties, rising above the constraints of nationality, race and religion. As of January 2001, there were a total of 690 sites -- 138 natural, 529 cultural -- in 122 countries worldwide. In November 2000, castle ruins and other sites in Okinawa were officially registered as part of The World Heritage, placing them in the company of such marvels as the pyramids of Egypt and the Grand Canyon. The Okinawans view these castles and sites as witnesses to the long history, exotic culture and enduring religion of the Ryukyus, enriched as they were by wide-ranging cultural and economic contacts from abroad. The preservation and care of these sites are a top priority for both the Okinawan people and the government. 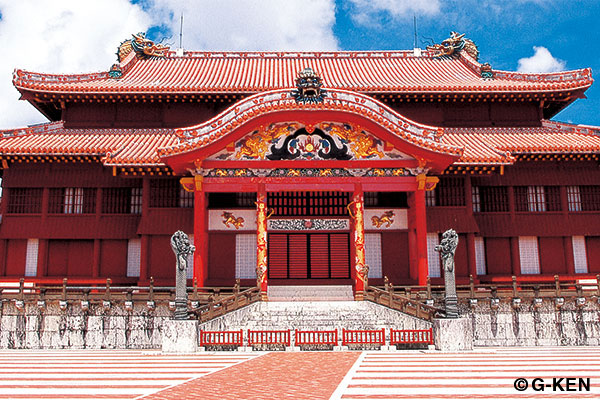 "Utaki" is a general term referring to sacred places in Okinawa. It also represents the ocean god from Nirai Kanai, the mythical place from which all life originates, who is said to protect the villages where utaki are located as well as ensure safety at sea. Evidence of utaki can be found throughout all of Okinawa, usually near fishing ports, and are still viewed with reverence even today.

"Gusuku” is written with the kanji that means “castle” in Japanese, but the character carries several different meanings in Okinawa. In the Ryukyu Kingdom the word gusuku indicated the king’s residence, ancient tombs, a fortification or a place sacred to the Okinawans. 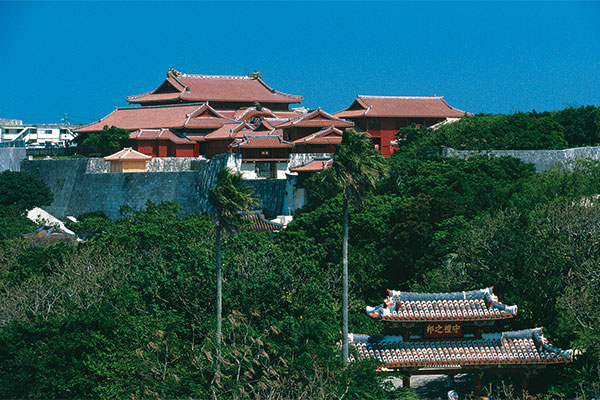 Royal castle of the Ryukyu Kingdom

Directions: From Naha Airport take Highway 58 north. Turn right at the Tomari Takahashi intersection. Continue on Highway 58 for about 10 minutes. You will see a large blue sign for the park. Follow the signs to the underground car park.

The original Shurijo Castle is believed to have been constructed between the 13th and 14th centuries by King Satto of Urasoe Castle. After expanding the grounds, King Sho Hashi later consolidated the power base of the Ryukyu Kingdom at Shuri. The king of the Ryukyus and the local government occupied the Shuri site until 1879, when the Meiji emperor brought about an end to the kingdom and made Okinawa a prefecture of Japan. The original buildings of Shuri Castle were completely destroyed by fire during the Battle of Okinawa in 1945. Reconstruction began in the late 1980s after the University of the Ryukyus was relocated from the castle grounds. Replicas of the original castle were constructed, and the two main gates and parts of the main wall were restored. 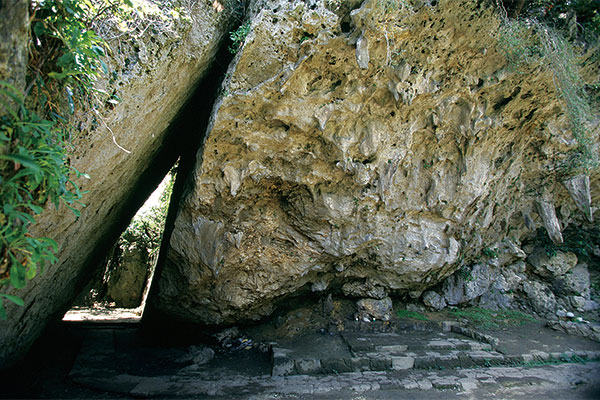 Directions: From Naha Airport go towards downtown Naha, then take a right onto Highway 329. Follow this road, which will turn into Highway 331. Pass Azama Sun-Sun Beach and take a right at the Chinen Post Office.

This is the most sacred site in Okinawa. A legend of the origin of the Ryukyus holds that the first of all gods, Tedako (god of the sun), ordered two gods to land on the islands and organize them as nations. The first thing they did during this process was to establish sacred sites, one of which was Seifa Utaki. Historically, most Ryukyuan gods have been female, and that is why the Ryukyu people believed that only women had the power to protect their men. Accordingly, the sisters and aunts of a king were called Kikoe Ogimi, and Seifa Utaki is the place where the Kikoe Ogimi were enthroned. The kings also used to visit the site every year to pray for a rich harvest. 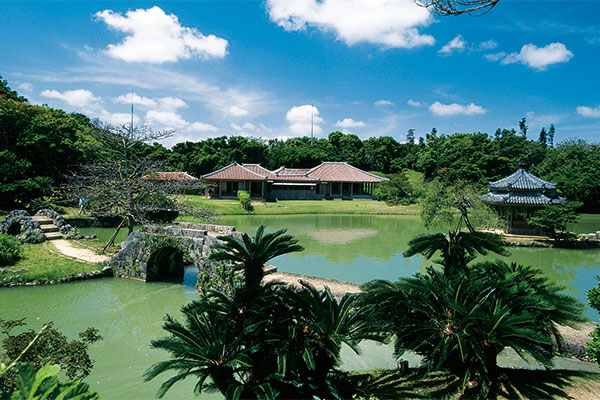 Directions: From Naha Airport follow Highway 58 and make a right after passing the Naha Military Port. Make a left into Highway 330; follow it to the Yogi intersection, and turn right. Follow the road through a left hairpin curve. Turn right at the next traffic light. Shikina-en Garden will be on your right.

Built in 1799, this is a garden that contains one of the royal family’s residences. It was used as a retreat not only for the royal family but also for envoys from the emperor of China, thus playing an important role in the diplomacy of the Ryukyu Kingdom. The garden was destroyed during World War II, but its restoration began in 1975 and continued over the next 20 years. Visitors can enjoy differences in style and atmosphere while touring the premises. The trees and plants are arranged in such a way that there are blossoms to enjoy in every season. 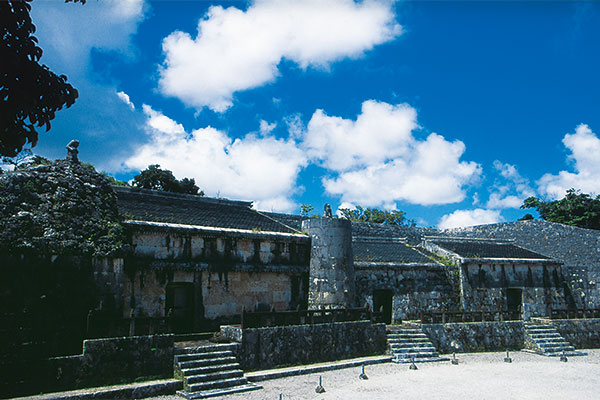 Grave of the second king of the Ryukyu Kingdom

Directions: From Naha Airport take Highway 58 north. Turn right at the Tomari Takahashi intersection and continue on Highway 29 for about 10 minutes. You will see a large blue sign for Shurijo Castle Park. Follow the signs, and Tamaudun is located about 500 meters before arriving at the park.

Shoshin, the third king of the Ryukyu Kingdom, built Tamaudun as the royal family mausoleum. Shoshin had the ashes of his father, King Shoji, moved to Tamaudun from their former resting place at Miagemuiudun. It is a large, impressive structure made of limestone and surrounded by a marvelous stone hedge. The tomb is guarded by three shisa that sit atop the structure and display humorous expressions. The coral sand covering the mausoleum grounds symbolizes purity. Tamaudun has three separate crypts: The central crypt was for preserving remains before washing; the one on the left was for the bones of kings and queens after they were washed; and the chamber on the right was where the bones of the rest of the royal family were interred. 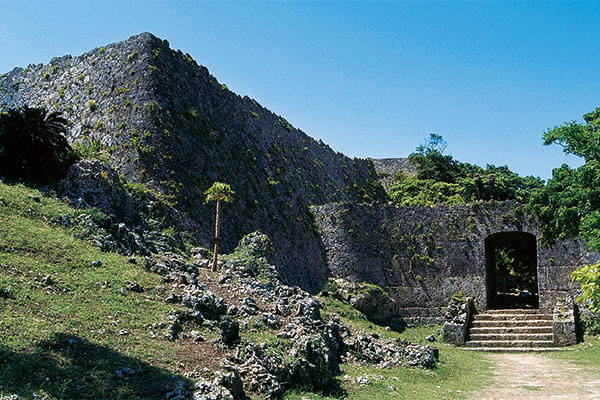 One of approximately 300 castle ruins in Okinawa, Nakagusuku is among the best-preserved and well-kept sites on the island. Built during the 15th century, this castle was probably constructed by Gosamaru after completing his work on Zakimi Castle. The vantage points from the walls of Nakagusuku offer breathtaking views. As you tour the castle grounds, it is easy to visualize the days of old. Don’t leave the island without seeing this National Historic Site. 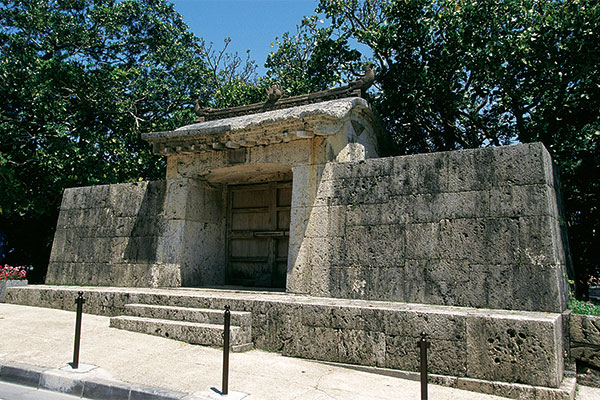 Prayer site located on the grounds of Shurijo Castle

This place of worship for the kings of the Ryukyu dynasty can be seen on the left after passing through Shureimon Gate. The ishimon is a gate made of stone except for the wooden door, and the utaki is a sacred grove behind the gate. The king would pray here for safe travels whenever leaving the castle on a journey. It was also the first place visited during a sacred ceremony called Agariumaai, which is translated as “making a pilgrimage to the eastern area,” and at a ceremony known as oaraori, the investiture of the kikoe ogimi, or high priestess. 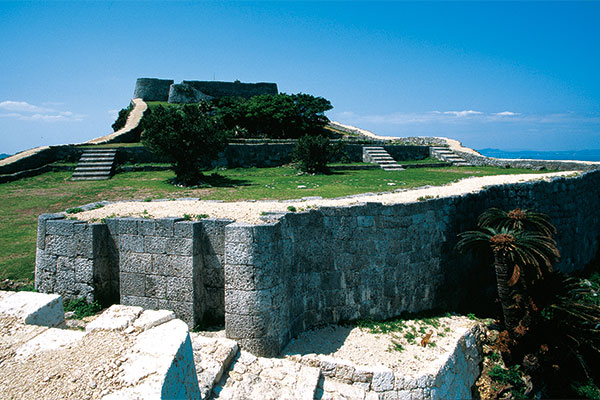 Residence of a hero, Amawari, a farmer who rose to the top level of government

Directions: Exit the Okinawa Expressway at Okinawa Minami and make a left onto Highway 23. At the Ikento intersection turn right onto Route 16. Follow the road straight for several kilometers until you go uphill as the road gently curves left. Halfway up the hill, there is a sign pointing to the Katsuren Castle Ruins on the right.

Located on top of a hill with a spectacular view, Katsuren Castle is believed to be one of the oldest in Okinawa; however, nobody is sure who built the castle or when. The castle experienced its heyday through trade with Yamato (Japan), China, Korea and other countries in the 14th and early 15th centuries, when Lord Amawari was ruler. Amawari was known as a clever leader who gained popular support when he seized power by pushing the current ruler off the castle wall. He proceeded to make Katsuren rich through agriculture and trade. Amawari and Katsuren were ruined in 1458 in a war against King Shotaikyu of the Ryukyu Kingdom. 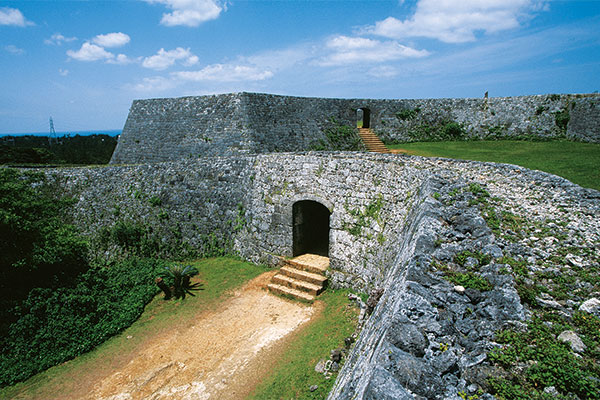 Directions: From Naha Airport take Highway 58 north towards Nago. Keep left and continue through Kadena Circle, about 4 kilometers. Turn left onto Route 12 for Zakimi. Follow the road for 1.7 kilometers, and then bear right up a steep hill. Turn right into the parking lot.

The ruins of Zakimi are all that remain of the castle originally built by Gosamaru about 570 years ago. After completing it, Gosamaru went on to construct Nakagusuku Castle. During World War II this historic site was used by the Japanese Army as a missile base before it was destroyed in battle. In 1972 the Japanese government formally recognized it as a National Treasure. 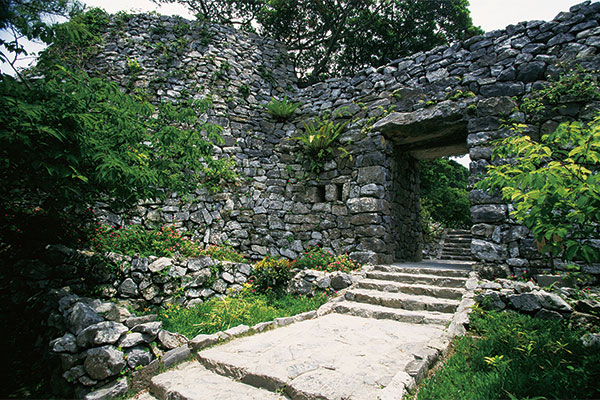 This northern castle prospered until the early 15th century

Directions: From Naha Airport follow Highway 58 north through Kadena Circle. Once you arrive in Nago, take a left towards Expo Park. When you see the sign for Nakijin Castle, turn right onto a small road. The castle site is located next to the museum.

Nakijin Castle is a major tourist attraction in Nago and has been recognized as a National Historic Remains Site since 1972. It is believed that Nakijin was built in the 13th century as a place of religious worship. On the 14 acres of castle grounds you can see several religious objects, such as prayer nooks, the fire-god shrine and the houses of the sacred maidens who presided over religious festivals. Recent excavations of pottery and utensils from the castle prove that there was tributary trade being conducted between Okinawa and China.