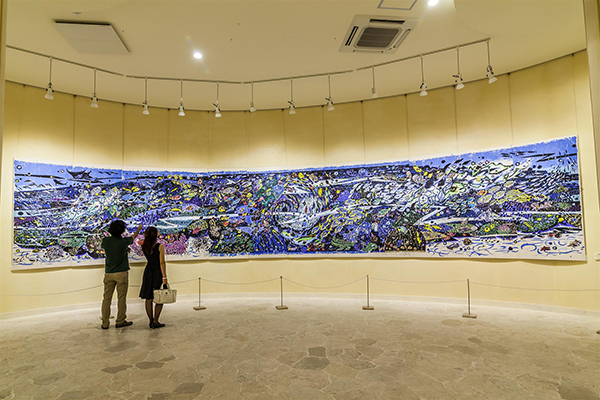 “Daishoenkan,” a large piece of work measuring two meters high and 12 meters wide, reflects Bokunen’s memories of the world below the sea. Various kinds of fish are depicted here, and according to experts each fish is depicted with ecological accuracy by Bokunen, who loves the sea. 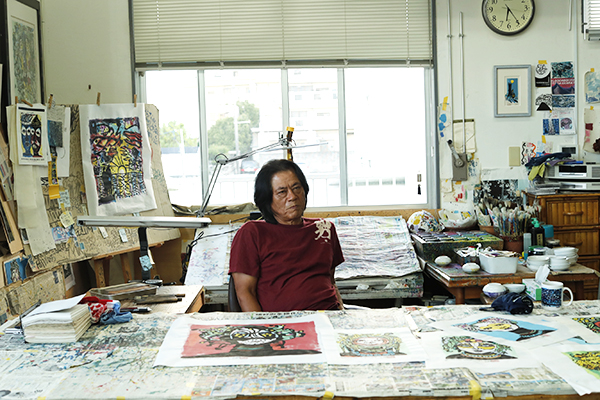 At his atelier located near the beach in Yomitan. Bokunen creates his artworks applying the urazaishiki, or back-coloring method. He performs all the steps involved in the work -- artist, carver and printer -- by himself.

Bokunen Naka
Born in 1953. Established graphic design company Project Core in 1979. Started engaging in diverse activities around 1987, including production of woodblock prints, publication of woodblock print collections and appearances on film and television. Won various awards such as the Japan Cultural Design Award and selected as an overseas cultural exchange ambassador by the Agency for Cultural Affairs in 2007, holding solo exhibitions and conducting cultural exchanges in South Korea, France and Spain. 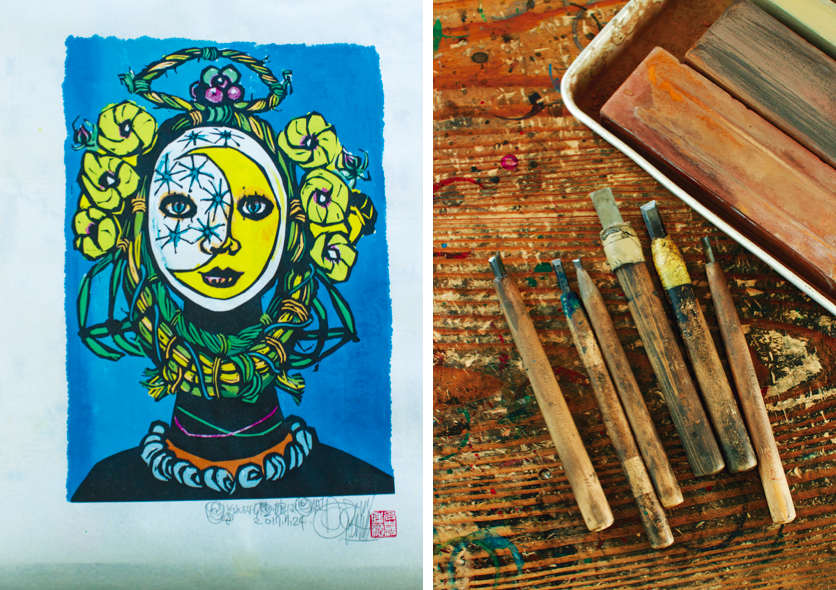 Bokunen Naka is a woodblock print artist who was born on Izena, an island with deep ties to the Ryukyu Kingdom. His artworks displayed in Bokunen’s World (Bokunen Art Museum) are not only characterized by vibrant colors that are typical of a subtropical island but also express – sometimes gently and sometimes dynamically – a spirit that cherishes the islands of Okinawa and the natural environment that exists there. “Kamigami no Yamayama – Mori no Shugorei” (Mountains of Deities – Guardian Spirits of the Island) and “Shima wo Horu – Umi to Kami no Shima” (Carving the Island – The Island of the Sea and Deities), which have become the theme of his exhibitions for the past several years, and the “Bansho Rensa” (Universal Chain) series, in which an invisible world is depicted, are an expression of his view of the world. They are all highly original works that symbolize Okinawa based on the unique perspective emanating from the personality of this artist, who has a sensibility that is typical of Okinawa, an island where there is the belief in Nirai Kanai (a realm across the sea where gods dwell and the spirits of the dead go).

Bokunen’s production process is also very interesting. He seemingly tries to concentrate his mind by praying in the direction a woodblock while standing in front of his workbench, but after a while he quickly draws an outline with a brush and starts carving the woodblock with a chisel. With Bokunen sliding his chisel speedily over the woodblock and carving it as if he were being urged on by some invisible being, it almost appears like a divine act as he breathes life into the woodblock in the blink of an eye. As soon as he carves out the image that is forming in his mind, he spreads India ink on the woodblock and presses it against getto (shell ginger) paper and then turns the paper over to imprint his design with vivid colors, finally completing the workpiece. As his works are very detailed, with many of them depicting the blessings of nature that exist in the sea and on land, it seems that he can clearly see the end result of his design that is inverted when it is printed. As such, Bokunen possesses extraordinary skills. He does not determine the theme at the beginning or even prepare an initial sketch. He is experienced at visualizing in his mind what he has seen before. His works are born when the scenes that have been completed in his subconscious mind flow out all at once. Bokunen refers to this as a process of “pulling out pictures from drawers in my mind that are filled with many pictures.”

Bokunen's grandmother was a well-known kaminchu (woman with exceptionally high spiritual power) on Izena Island. He says that as he was interested in how the kaminchu, who wore crowns of grass on their heads, conducted solemn ceremonies, he often climbed trees in his early childhood to secretly watch what was going on. Bokunen was a nature-loving boy who would immediately climb up any tree that he happened to find. He says that even today he still climbs trees in the mountains to commune with Mother Nature. Perhaps he pretends to be a stone, patiently listens attentively to various sounds of nature, feels them with his five senses and stores various records in the memory banks of his fine-tuned spirit. The “Ki no Musume” (Tree Daughter) series is a group of recently created works reflecting a new aesthetic sense and expressing Bokunen’s world that has indeed evolved through his dialogue with Mother Nature. At Bokunen Art Museum in Chatan Town, it is possible to see these woodblock prints that convey a realistic sensation as if you could hear the voices of spirits or living things as well as Bokunen’s life force, which is full of energy. Through his artworks visitors are encouraged to experience the attractiveness of Okinawa such as the starry sky, scorching sun and sparkling sea illuminated by sunlight.

The “Ki no Musume” series, printed with colorful paints used to imprint the artist’s spiritual and primitive designs that appear to represent a spirit, or kaminchu. 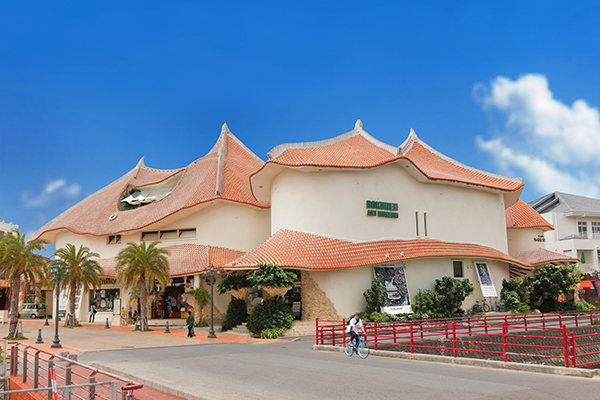 Bokunen Art Museum
A permanent exhibition based on seasonal themes can be seen at Bokunen Art Museum inside the AKARA building located in Mihama, Chatan Town. Original artworks are available for purchase.  With gentle curves designed by Bokunen, AKARA, which also appears to be a piece of art itself, is a facility where visitors can enjoy art, fashion and dining.